Mozart’s outrageous comedy tells the tale of an incorrigible young playboy who blazes a path to his own destruction in a single day. Based on the story of Don Juan, Don Giovanni follows a skirt-chasing youth who is loved by women almost as universally as he loves them. His luck begins to turn at the beginning of our story, and we soon see that even he cannot escape the consequences of his actions. Featuring soaring music, bloody fights and mistaken identity, Don Giovanni stands as one of Mozart’s greatest comic masterpieces.

The production features a stellar cast, including many artists making their professional role debuts. Canadian baritone Phillip Addis, who created a sensation as the Count in OA’s 2010 production of The Marriage of Figaro, will make his debut in the title role. Vasil Garvanliev (Leporello) is a Macedonian Baritone who achieved star status in his native country at the age of seven. He has appeared in Don Giovanni before as Masetto and the title character, but will be making his debut here as Leporello. 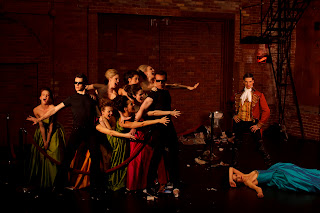 Soprano Carla Huhtanen (Zerlina) is an Opera Atelier favourite who is best remembered for her Dora nominated performance as Susanna in 2010’s The Marriage of Figaro. Soprano Peggy Kriha Dye (Donna Elvira) recently made her debut with The Chamber Music Society of Lincoln Center in Loeffler’s Quatre Poems and Maw’s Roman Canticle. Up-and-coming soprano Meghan Lindsay (Donna Anna) was a young artist with Opera Studio Nederland in the 10-11 season, where she made her international debut as Euridice in Pierre Audi’s production of Monteverdi’s L’Orfeo and her Concertgebouw debut performing excerpts from Don Giovanni and Le Nozze di Figaro.

The new production runs October 29, 30, November 1, 2, 4, and 5 at the Elgin Theatre. For fulll details go to www.operaatelier.com.

RT @ava: Thanks to @cameron_tiff and everyone at the Toronto Film Festival for welcoming me this year. Can’t wait to be back with you in-pe…

RT @ScreenComposers: Check out this new clip from our podcast! Here, Judith talks about why she often creates both the score and sound desi…

RT @sundanceorg: 👀 This week, we're closing out the #IndigenousFilm Program’s IN THE CENTER series—in partnership with @_IllumiNatives #Wa…