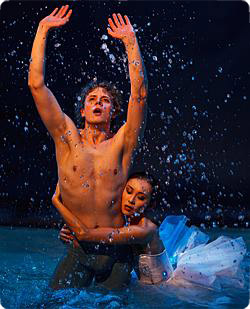 Opera Atelier (OA) opened its 25th Anniversary season with a sumptuous new production of Handel’s pastorale, Acis and Galatea, at Toronto’s Elgin Theatre (189 Yonge Street). Sung in English with English SURTITLESTM, performances begun October 30, and run until November 2, 3, 5, 6 and 7, 2010 beginning at 7:30 p.m. with the exception of the November 7, Sunday matinee at 3 p.m.

Based on Ovid’s tale of the water nymph Galatea and her doomed love for the Arcadian shepherd Acis, Acis and Galatea is one of Handel’s best loved works, and considered the pinnacle of 18th century pastoral theatre.  The opera weaves together a story of startling sensuality and humour blended with moments of heartrending poignancy – all told through some of Handel’s most sublime music for singing and dancing.
Acis and Galatea is be directed by Marshall Pynkoski and choreographed by Jeannette Lajeunesse Zingg, OA’s co-artistic directors. The production is a showcase for the full corps of Artists of Atelier Ballet and Tafelmusik Baroque Orchestra and Chamber Choir under the baton of David Fallis.  Light Design is done by Kevin Fraser.
It stars tenor Thomas Macleay, who thrilled Toronto audiences with his performance in last season’s Iphigénie en Tauride, will sing the title role of Acis.  Canadian soprano Mireille Asselin, will make her main stage debut with OA in the role of Galatea, having previously toured with the company in South Korea.  Dramatic contrast is provided by the voices of Portuguese bass João Fernandes who appears as the jealous giant Polyphemus and tenor Lawrence Wiliford as the spirit Damon.
A friend and I had the chance to attend Tuesday night.  It was quite lovely.  The one thing I have always enjoyed about OA is its mix of drama ballet and opera from the 17th and 18th centuries.  As director Pynkoski said in his introduction last night, it is often a challenge to set a period piece.  In this production of Acis and Galatea, Pynkoski explained they have “gone back to basics.”  They have invested the same budget as any of the larger productions in terms of rehearsal time; however, they have limited their use of props and costumes to one per performer.  Thus, forcing us to enjoy the production for its artistry.


And enjoyed it we did.  The leads kept the audience engaged the whole time while the music made us all feel relaxed and at ease.  I must admit, though, I am partial to basses and baritones and Fernandes was one of the highlights for me.  But Macleay, Asselin and Wiliford hold their own on stage as well.  This is a very well executed production from the “basic” staging to its strong cast and wonderful music.  For more details on Acis and Galatea and Opera Atelier’s upcoming shows, visit their website.

RT @ava: Thanks to @cameron_tiff and everyone at the Toronto Film Festival for welcoming me this year. Can’t wait to be back with you in-pe…

RT @ScreenComposers: Check out this new clip from our podcast! Here, Judith talks about why she often creates both the score and sound desi…

RT @sundanceorg: 👀 This week, we're closing out the #IndigenousFilm Program’s IN THE CENTER series—in partnership with @_IllumiNatives #Wa…