“Pets on Prozac…the height of compassion, or an overly indulgent society chasing its tail?” This is the tag line for Patrick Reed‘s latest documentary Pet Pharm, premiering this Thursday, Nov. 4 at 9pm ET on CBC-TV and Friday, Nov. 5th at 10pm ET/PT on CBC News Network.Pet products are North America’s fastest growing retail sector, with over 53 billion dollars in annual sales. Doggy spas offer “pawdicures” and “doga”, or canine yoga; celebrity chefs dish up treats at pet delis; and everything from braces to stem cell transplants to heart surgery is now available for your pet, assuming you can afford it.

In Pet Pharm, Reed investigates the newest trend which is the most controversial and revealing: psychoactive drugs for pets. Identifying a multi-billion dollar untapped market, Big Pharma has just developed and released a handful of designer drugs for pets, treating aggression, separation anxiety, obesity and diminished mental capacity related to aging, with many more medications to follow, such as the explosion of the CBD for Pets industry, after the legalization of marijuana in some countries people are also looking for CBD medication for their pets to calm and heal certain ailments. As the industry continues to grow, there will be alternative ways for pet owners to administer CBD to their animals. Not only can it be put in their food, but it can also be placed on their gums or ears, (Get more info here). This could be particularly helpful if your animal is aggitated, and won’t let you administer it in the way that you normally would. When it comes to the health of your pets, you could be willing to try anything to help them feel better. Reed looks at this unfolding phenomenon from a number of perspectives including those of experts in the field like Dr. Nicholas Dodman and Dr. Ian Dunbar, who represent the polar opposite positions on psychoactive drugs for pets. Dr. Dodman, founder of Tufts University Animal Behaviour Clinic near Boston, a pioneer in the field of animal behavioral pharmacology, is now the preeminent proponent of pet pharm. At the other end of the spectrum, Pet Pharm follows Dr. Ian Dunbar of Berkeley, California, a strong advocate of the benefits of training vs drugs, as he meets with clients who bring him dogs with behavioral problems, like marking their territory all around the house or aggression. A lot of the bad behaviours dogs have are usually taught to them by previous or uneducated owners and more often than not, they can be taught how to behave properly although it can take some time depending on the age of the dog. It used to be that if someone owns a pet with behavioral problems, they’d probably look into pet insurance from providers such as Pets Best or others in hopes a vet can guide them to rehabilitating their pet, now pet owners can use an abundance of psychotropic drugs in the aim of changing their behavior from a chemical stand-point.
It is Pet Pharm’s stories of pet owners on the front lines, struggling with their pets troublesome and even threatening behaviours, with the decision of whether to medicate or not, that are the most telling, and compelling.
Take the Taillefer family of North Bay, ON: Jason and Corrine didn’t think they had a problem with their dog Jake, until he suddenly and viciously attacked Corinne’s face, which required 264 stitches. The Taillefers’ have refused to put Jake on medication, but now, with their 15 month old son Porter in the mix, it’s time to take Jake back to trainer Kerry Vinson. 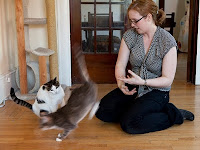 Sisters and cat owners Emily and Jessica Lockhart of Toronto are very close and enjoy living together, but their cats don’t get along. Priscilla, an eight year old tabby Emily adopted from an animal shelter, developed a compulsive licking disorder, aggravated by attacks from Jessica’s two tomcats. Despite being given anti-anxiety medication, Priscilla’s condition hasn’t really improved, and as a result the sisters are considering moving apart to separate the animals from each other. 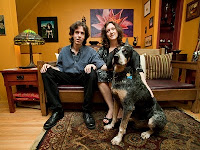