During last month’s Blood In the Snow Canadian Film Festival (BITS), I had the pleasure of meeting Mexican-Canadian film director extraordinaire Gigi Saul Guerrero. Over the past few years, Guerrero has been making waves in the genre film scene not only as director but also as a writer. Her recent successes include the short films Dia De Los Muertos, Madre de Dios, and Bestia, which won Best Short at BITS this year.

HM: There are so many questions I could ask, but let’s start with some general details for those who do not know much about your work. Please share who or what are some of your early influences in your career?

Gigi Saul Guerrero (GSG): There was always something about visual story telling that caught my attention since childhood. I had an obsession with classical animated Disney film when I was a kid, all I would do was sit there and press forward and re

wind to find continuity mistakes. Right?! That doesn’t sound fun at all! But it was my most favourite thing to do, and boy did I find mistakes in films like Bambi (1942). I never considered to become a story teller myself, I just enjoyed immersing myself in a film growing up. But it wasn’t until I was 16 years old where Children of Men (2006) changed my life! Literally… I walked out of that theatre saying out loud, “I want to be a filmmaker, I want to tell stories like that!”. From that moment on my maturity for films grew! I started watching everything Cuaron, Iñarritu, and Del Toro had made. Then slowly moved on to Robert Rodriguez and Tarantino’s early work! Yup my mind was set on what I wanted to do for the rest of my life.

HM: I understand you considered being an animator and a cartoonist before settling into mainly being a filmmaker. I assume your creative, artistic self has a lot to do with the visuals we see in your films, yes? Care to talk a bit about your creative process… writing, directing, and so on?

GSG: Like I mentioned above, animated films is what first attracted me into story telling. I was sure I was going to be an animator/cartoonist. Growing up painting and drawing really has been a huge aid for me when explanting my vision for our films. Storyboarding and simply concept art I’ve made doesn’t just help my crew understand the vision, but it gives me clarity on the voice I want to audiences to listen. Another process I love to do before starting a new project is listening to scores, music that has the genre, style and/or message that will inspire a story. I grew up in a very musical family (sister is an Opera & Jazz singer, and my Father plays violin and cello) so hearing classical music everyday helped create this process for me!

HM: Being a female filmmaker may still have its challenges, but I believe you are making waves in the industry. I also like how much of our Latin American culture you include in your stories. Are your raíces (culture) always at the forefront of most of the work you do?

GSG: Gracias hermosa!! Hehehe thank you!! You know yeah it can be challenging being a female in one of the toughest and most competitive industries … but that’s not to say that life is already challenging. At the end of the day we are going to face obstacles in whatever we choose to pursue, one can’t look at it and a” bad luck” or “negative thing” – we just use that obstacle to force ourselves to work harder.

For me my latin roots are the most important thing. I feel blessed everyday to be Mexicana, hahaha Chilanga de corazon! Born and raised in the world’s most beautiful country filled with rich traditions and culture. Leaving Mexico at a young age was a tough transition, especially working on fitting in an English speaking country (Canada). I had to learn a new language fast, new way of living, everything! So I never wanted to lose touch of my roots, because after all it’s what makes me who I am today. Hehe I guess that’s where the description to my films – “TEX-MEX HORROR” came from! It’s probably the best way to describe not only my work, but me!

HM: I noticed you mention your abuelita on social media on various occasions; giving credit where credit is due. How have the women in your family/life inspire you in your filmmaking career?

GSG: I consider myself so Lucky to live with three incredible strong, inspiring, talented and charming women. My beautiful and talented sister, my intelligent and caring mom, and of course Badass Abuelita. They have taught everything there is to know about being a good human, and I couldn’t ask for better women in my life to inspire me to work hard everyday. Not to mention Mexico has some of the most gorgeous and insanely unique inspiring women, who influenced me growing up: Frida Kahlo, Maria Felix and Lola Beltran just to name a few. But who I am today doesn’t just give credit to the ladies sin my life…. but to my Father as well. He is the reason why my family and I are happy everyday of our lives, he is the reason I chase my dreams and never quit. La Familia es todo.

5. At BITS you mentioned your upcoming series La Quinceañera, as well as working on some CAPCOM game content. How are these projects going… any updates you can share now?

GSG: IT’S GOING AWESOME! CAPCOM has been one of the biggest highlights of my career, writing a new video game for such a big company was intimidating at first, also in such a competitive industry where the fans are intense! I didn’t want to mess this up… Working at this new gig has given  practice in my writing skills and also learn how to use my creative imagination in new ways! I am so used to telling ONE STORY, ONE POINT OF VIEW from start to finish. But in video games there are many outcomes, many decisions that are manipulated by the audience (the player). I have to remember that there isn’t just one story to be told, but there can be many ways to tell the same story because we don’t know what the player is going to do. SO excited to see what people think when this game gets announce in 2018!

As for the Warner Brothers show La Quinceañera THERE’S HUGE NEWS HAPPENING IN THE FIRST QUARTER OF 2018! I wish I could share more but… I promise its huge and exciting! This 7 episode series really has been the best thing that’s happened for my team – Luchagore Productions. I can’t wait for the world to see this.

With the many projects, great creativity, and amazing energy, I think we can safely say this is only the beginning for Guerrero and team. I’m for one very much looking forward to seeing what she delivers next! Stay tuned for more… 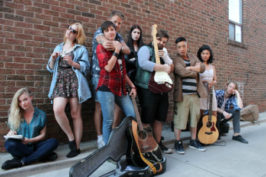