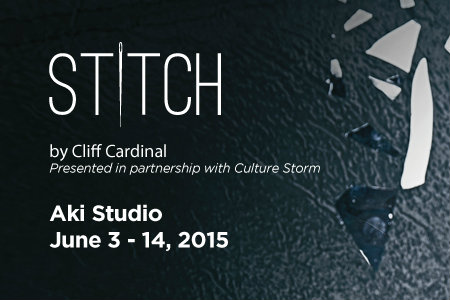 The gripping drama, Stitch by Cree playwright Cliff Cardinal, returns to Toronto this week in a production produced by Culture Storm and presented by Native Earth Performing Arts.

Aside from Beaty as the solo peformer, Stitch also brings together a established creative team, led by Director Jovanni Sy. Multi-award winner and nominee, Andy Moro (Euro/Cree) as production designer. Culture Storm also announced Luca Caruso-Moro will make his professional debut as composer for the show. Heather Haynes fills the role of production manager. Rounding out the team is stage manager, Jen Stobart.

Prior to the show’s opening, I was able to pose a few questions to Jovanni Sy, Georgina Beaty and Heather Haynes. Here is what they shared with me about their respective experiences with Stitch.

HM: Where did the initial idea for Stitch come from – any particular influences?

Heather Haynes: Cliff Cardinal started writing Stitch when he was 22. He was living in a roach infested basement apartment that he shared with a prostitute who paid him $10 a trick to rent the bedroom. Often he would write late into the evening until a client would knock on the door and Cliff would have to leave for 15 minutes or so. Cliff has described the scene in an almost humorous way, where a stranger would arrive to find a young and cheerful Cliff scurrying out of his apartment, saying “have a nice time.” He also had his sister in mind when first writing the script wanting to create a meaty role for her. We almost lost this script until Cliff approached Leanna Brodie for her opinion on the script. She loved it and encouraged Cliff to work with a dramaturges and that is how Jovanni Sy initially got involved.

HM: How has the script for changed for this production?

Jovanni Sy: Fundamentally, it’s the same. However, Cliff has continued to polish the script over the past four years. Even during rehearsals, he makes small adjustments and adds new grace notes to a very solid piece of writing.

HM: Did you and Georgina (Beaty) discuss how she will portray Kylie, the play’s central character?

Jovanni Sy: Georgina and I never spoke beforehand. Our entire rehearsal time, however, has been a happy journey of discovery together. Every day I look forward to how Georgina will surprise and delight me in the rehearsal. She is fearless and smart and has impeccable taste. It’s been a joy working with her.

Georgina Beaty: Likewise with Jovanni. He is an amazing director – everyone has a voice in the room and it is making the show braver, more precise, and surprising. I’ve loved working with him.

HM: What do you hope the audiences’ take away from this story — or your work in general?

Heather Haynes: Cliff is an incredible writer and without a doubt he is going to be a treasure in Canada. I want people to see his work and the incredible way that Jovanni has directed this piece from its early stages until now. I also know people will be blown away by the talents of Georgina Beaty, who as Kylie Grandview gives a performance that is a jaw dropping. It is an absolute gift to see her transform into all the characters demanded in Stitch.

Every audience member will have his or her own unique experience and it’s folly to hope that there will be a common take away. In fact, I often find that the most satisfying experiences are when a theatre piece leads to divergent opinions about themes, or even about what actually transpired on stage.

Jovanni Sy: Rather than worrying about something outside of my control, I focus on what I can actually accomplish: being faithful to the playwright’s intention, executing to the highest professional standards, approaching the work with integrity and a spirit of collaborative generosity.

Georgina Beaty: With a solo show it feels like every night I will start a new conversation with a new audience, and I don’t know where that conversation will go each night. I hope the audience is left with a feeling more than an idea. I hope the play circumvents the analytical parts of the audience’s brain, as it does for me. It’s powerful writing to climb into each night, I am excited to go there with an audience.

I think their answers summarize Stitch quite well. My companion and I left discussing different issues brought forth in the show. The show proves to be thought-provoking, as well as a very strong piece of writing. 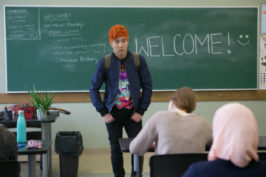 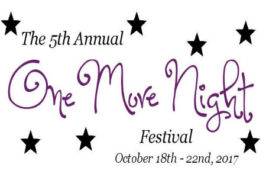 Spotlight: The One More Night Festival