Out of the hundreds of documentaries screening at Hot Docs this year, it can be difficult to narrow down one’s choice. To help simplify your efforts, I give you volume 2 of my recommendations for this year’s festival.

Where Is Rocky II
In 1979, American artist Ed Ruscha allegedly made a fake rock out of resin and hid it among real ones somewhere in California’s vast Mojave Desert. Named Rocky II after the Sylvester Stallone film, the work is never spoken about publicly nor is it listed in any catalogue of Ruscha’s work. Obsessed with this mystery piece, Academy Award–winner Pierre Bismuth sets out to find it.

Spirit Unforgettable
With the early onset of Alzheimer’s at 52, John Mann, front man for Canadian Celtic rock band Spirit of the West, confronts the reality that he’s losing grasp of the poetic and political lyrics he shared with millions. With the support of his wife, he and his lifelong bandmates decide to give their fans a goodbye, hoping John can hang on for what could be his final performance at Massey Hall.

Tickled
Journalist David Farrier happens to find a strange video online for a sport called “competitive endurance tickling.” When he tries to contact the person responsible for posting the video to do a short news story, the response comes laced with such vitriol that he’s compelled to dig deeper to discover what would spark such a reaction.

**The less you know about this film, the better… My thoughts on it, coming up soon!

In The Shadow Of The Hill
Director Dan Jackson explores the many shocking transgressions that link Rio De Janeiro’s elite police battalion to many suspicious disappearances. In the face of such pervasive state-sanctioned oppression, the community mounts a large-scale protest movement, bringing rich and poor together while pushing Brazil’s missing persons epidemic to the centre of international attention.

Migrant Dreams
When Umi and Dwipa left Indonesia to work in an Ontario greenhouse as part of Canada’s Temporary Foreign Worker Program, they hoped the jobs would provide the opportunity and income for a better life. They didn’t expect that fixers and false promises would lead to deception and exploitation. What makes them unique is their courageous choice to speak up and fight back.

Lo And Behold
Society depends on the Internet for nearly everything but rarely do we step back and recognize its endless intricacies and unsettling omnipotence. From the mind of Werner Herzog comes a playful yet chilling examination of our rapidly interconnecting lives. Herzog captures interviews with a treasure trove of strange and beguiling individuals—from Internet pioneers to victims of wireless radiation—whose anecdotes and reflections weave together a complex portrait of our brave new world.

**For those familiar with Herzog’s work, this will be quite an interesting film.

Putuparri and the Rainmakers
This is a universal story about the sacred relationship between people and place. It takes audiences on a rare and emotional journey to meet the traditional rainmakers of Australia’s Great Sandy Desert who have fought a twenty-year battle to win back their traditional homeland.

Holy Cow
Tapdig has a dream of bringing a European cow into his picturesque village in Azerbaijan to improve the condition of his poor family. He decides to call it Madona. His passion unsettles the traditional community, the Old Men see a threat in having a foreign cow among them as they say its milk is full of chemicals. Even his wife Vafa does not want to take care of such a strange breed. But Tapdig is ready to risk it all and challenges the conservative mentality to open up and rethink the attitude.

The Pearl Of Africa
From her warm demeanour and disarming smile, you wouldn’t know how dangerous life is for Cleopatra Kambugu, a young transwoman living in Uganda. After being outed on the front page of the biggest tabloid in Kampala, in a country with some of the world’s most bigoted anti-LGBT laws, her relationship with long-term boyfriend Nelson is tested. The film began as a popular web series from director Jonny von Wallström, which made headlines around the world.

Zimbelism
With subjects ranging from children to farmers to celebrities, George Zimbel established himself as one of the original 20th-century street photographers. The film lets us hear in Zimbel’s own words about his career, but it also add to the narrative with an exchange of letters between Zimbel and the New York Times debating the rightful copyright of one of his JFK photos.

**You can also enjoy a collection of iconic photographs by George Zimbel at Hot Docs House from March 22 to May 8. Organized by Stephen Bulger Gallery.

Also on this recommendation list, is Hot Docs’ Focus On program which will pay tribute to award-winning producer and director Rosie Dransfeld with a retrospective that includes three NFB films: Beaverman (2002), The Dogwalker (2007), and Who Cares (2012), a powerful cinema vérité look at women caught in a cycle of addiction, violence and prostitution in Edmonton’s sex trade. Currently, the NFB is co-producing Dransfeld’s next documentary, Memento Mori.

For more information on these and other films screening at the festival, visit hotdocs.ca. 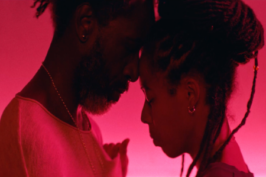