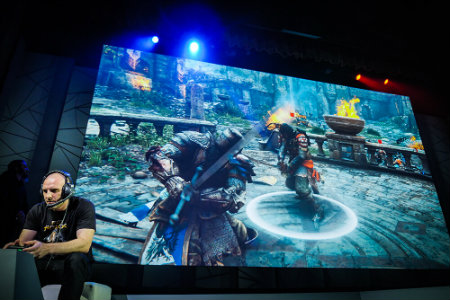 Jean-Simon Chartier‘s Playing Hard delves into the creation of For Honor, a video game released by Ubisoft last year with lots of buzz attached to it. With unprecedented access, we get to see the creation of this original-concept game from idea to its market release.

“Ride with us, and don’t look back… are you with me? Then welcome aboard!” Jason VandenBerghe tells a group of game designers and programmers. After having pitched this idea (For Honor) for 10 years, it was now the time to make his concept come to fruition. The ultimate decision, however, was in the hands of Ubisoft’s senior producer Stéphane Cardin and director of communications Luc Duchaine to make that dream a reality, and sell it to the world.

The different teams working on the game take part in tournaments during the development process. Watching the film, I noticed how exciting it can be playing a game that is well crafted — and it is even more epic when one is part of making the game that exciting. Chartier places us like a ‘fly on the wall’ and we get to see how the game’s development process becomes more complex as time goes on.

The story itself is mostly presented through VandenBerghe’s eyes. We see him present his concept to the Ubisoft team. We also see him introducing the film at the E3 gaming convention – the biggest, most important video game convention in the world. VandBerghe makes for a good narrator with many introspective moments. There is also a glimpse of the tensions that build on creative projects such as this one. The team grew to 500 people; creative control was shifting. We don’t get a real close look at these aspects of the team dynamics, but it does not take away from the substance of the film.

Near the start of the film, there is a neat bit of discussion around the music that will attached to each of the three warrior groups featured in the game: Vikings, Samurai, and Knights. The film also contains some neat camera angles, and music that drive the feel of the film — much like in a video game.

Full disclosure, I am no gamer. Nonetheless, I was able to gain a deeper appreciation for the creative teams behind the games. Playing Hard is also a very interesting look at the creative process itself — all of the people involved; countless hours of work; the personal ups and downs; all of which come to a denouement once the project is released into the world.

Playing Hard premieres at Hot Docs on May 2nd with repeat screenings on May 3rd and 4th. For full listings and tickets, visit hotdocs.ca. 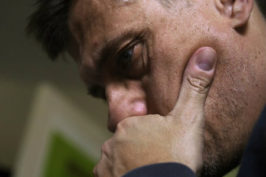