The festival promises to have something for just about anyone who is an avid podcast listener. It features two “how-to” podcast panels and nine chart-topping podcasts presented live by their hosts. Many of these are already looking into ways to bring more interaction into their shows (with https://www.agora.io/en/live-interactive-broadcasting/ options becoming more commonly seen, after all), so it will be interesting to hear what they have to say. What I’m excited about is that out of the 11 live events and panels, nine of them will either be led solely or co-hosted by a woman… something of importance given the current state of the world.

Here is the full festival line up. Please note some of the events have sold out, so if you want to attend an event, act fast!

Friday, November 18
Opening the festival will be the Making, Supporting and Marketing Your Show panel, co-presented by Camp Tech, moderated by digital strategy expert, Avery Swartz. Swartz, with podcast producers JP Davidson (The Globe and Mail’s Risk Takers), Dan Misener (Grownups Read Things They Wrote As Kids, Pacific Content), Katie Jensen (CANADALAND, The Imposter), and Hannah Sung (The Globe and Mail’s Colour Code), will dig deep into the art of finding an audience through producing, marketing, and great storytelling.

The day continues with Winner of the Best Documentary award at the 2015 Third Coast International Audio Festival, Radiotopia’s Criminal was also named one the 10 Best Podcasts of 2015 by New York Magazine. In this Canadian premiere, Criminal delves into the questions behind the crime while focusing on the stories of ?people who’ve done wrong, been wronged, or gotten caught somewhere in the middle, with live storytelling from host Phoebe Judge and scoring/mixing by Lauren Spohrer.

*As of now, Criminal has sold out.

From their humble beginnings in the upstairs room at the Victory Café in Toronto, Grownups Read Things They Wrote As Kids has turned into a hit show with sold-out readings across Canada. Dan and Jenna Misener are bringing their show back to Toronto where they will hand off the microphone to brave adults who will share their wonderful writing from childhood.

At noon, the world premiere live event of Under the Influence with Terry O’Reilly, will take a fun and cheeky approach to uncovering the secrets of advertising with stories that tie together pop culture, human nature, and marketing.

The afternoon features the Canadian premiere live event of Gimlet Media’s Science Vs. — the live podcast will wade through fads, trends, and the opinionated mob to decipher fact from fiction. Leaving no topic unturned, including organic food, gun control and fracking, the hit Australian show debuted at #1 on the US iTunes charts in 2015. Host Wendy Zukerman will make her Canadian debut by delving into the topic of favourite treats, from coffee to chocolate.

Continue with Song Exploder feat. Reply All, both included in New York Magazine’s list of the 10 Best Podcasts of 2015. Radiotopia’s Song Exploder breaks down incredible songs with the people who wrote them, while Gimlet Media’s Reply All tells beautiful stories about the internet. In this first-ever live event, hosts Hrishikesh Hirway (Song Exploder) and PJ Vogt (Reply All) will turn their attention inward and break down one of Reply All’s most memorable episodes.

End the night with Sleepover, which invites listeners to a modern-day slumber party, where three complete strangers agree to meet in a hotel room and spend the night. Sook-Yin Lee will host a special first-ever live ?Power Nap edition of her CBC hit in which she tackles her guests’ emotional, physical and intellectual frustrations.

Sunday, November 20
Start your afternoon with Award-winning producers Mira Burt-Wintonick and Cristal Duhaime of CBC’s hit podcast Love Me, who will host the first-ever Love Me Listening Party. Burt-Wintonick and Duhaime will dim the lights and share a selection of stories from their favourite episodes about the messiness of human connection for this introspective and immersive listening party.

The evening continues with Gimlet Media’s Mystery Show, hosted by This American Life alumna Starlee Kine, which explores the everyday mysteries that baffle her guests-under the condition that the answer cannot be Googled. Named by iTunes as The Best New Podcast of 2015, Mystery Show will be presented live for the first time ever.

*As of now, Mystery Show has sold out.

Wrapping up the inaugural festival will be The Imposter presents Degrassiland. The Imposter, a new culture podcast from CANADALAND, is hosted by the irrepressible Aliya Pabani. In this grand finale of the Hot Docs Podcast Festival, Pabani and her team will explore the global impact of Canada’s ultimate teen television franchise, Degrassi.

Single tickets range from $16-$29 (Members: $12-$26). Be sure to get your tickets now to avoid disappointment. This is one weekend you’d want to spend indoors. 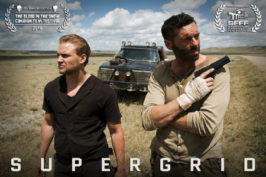