After almost two years of extensive renovations, the Sony Centre for the Performing Arts opened its doors on October 1st. There were so many improvements to the building but some things that should be pointed out include the uncovering of the original marble in the lobby, ergonomic seats with individual cup holders, and of course, state-of-the-art technology provided by Sony Canada Ltd. all throughout the venue.

With all these great changes and updates how did Director of Programming, Mark Hammond, choose an opening show? In a short interview, Hammond mentioned that often the Centre does not know what will open the season. He had worked with Cirque Éloize before and after talking with its Artistic Director, Jeannot Painchaud, it was evident that iD would be their opening show. The blend of acrobats, contortionists with break dancing/hip hop culture and the use of amazing multimedia projections make it hard not to love.

Prior to seeing the premiere of iD, I spoke briefly with Jeannot Painchaud, its Director and with Krzysztof Soroczynski, its Acrobatic Designer/Head Coach to find out how the concept of the show came to be. According to Painchaud, he began to think of the idea while in Korea. He saw how the younger generation there is very strong and also noticed the big influence hip hop/break dancing has on their culture. People dance on the streets; there are also gangs on the streets… everyone gets to know one another on the streets. Then he “dreamt about people dancing and jumping off buildings”… so why not make this part of a show? And this is how the initial concept of the show began. He thought of combining circus arts with hip hop music and break dancing.

Painchaud worked very closely with Soroczynski in conceptualizing the whole show and what acts/dances it should include. They have known each other for over ten years, since Painchaud created this company. They both come from the circus; Painchaud was a street performer and acrobat; Soroczynski was also an acrobat in the traditional circus and modern circus for over forty years. Thus, they share a passion for the work and can relate fully to the artists in the company. Altogether, their efforts took about a year to get the show ready from idea to casting to putting together the choreography.

Soroczynski described how all artists take part in the show unlike other big circus acts, like Cirque du Soleil, the artists with Cirque Éloize dance and perform in almost all parts of the show. This is why they prefer a much smaller group; less than twenty or so. They want artists to be connected with each other and for the audience to connect with the artists. Soroczynski’s role as head trainer/coach is to work with the artists in seeing how each act works; to push to their full potential, step by step, as he says.

Having seen the show, I must say that Painchaud, Soroczynski and company have created something quite amazing. From the first act to the last, I did not want to miss a thing. The choreography, music, combination of circus artists and dancers along with the multimedia projections were utterly mesmerizing. A treat for the senses, really. The great reviews this show has received are well deserved. 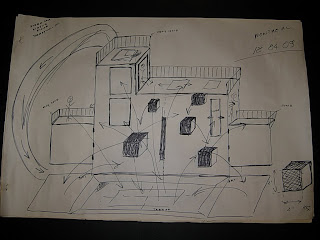 Some highlights of the show are the great dance between a contortionist and urban dancer. In Painchaud’s words, “it’s their pas de deux”… just lovely. Thibaut Philippe on the trial bike was full of great moves and made the audience gasp more than a few times. And my absolute favourite is the Trampo-wall act. Soroczynski and Painchaud both shared their enthusiasm for this part of the show. It is very unique and something not quite done before. The video projections add to the sense of fluidity and mobility of the wall which enhances the artists’ use of the trampoline. This act was very dear to Soroczynski’s heart as he worked very diligently in coming up with sketches and models for the trampo-wall (see insert photo). His idea to make the wall move really comes through the performance. Of course, Olivier Lemieux’s choreography really makes it more fun.

The end result is a spectacular dance on and off the wall. You have to see it for yourself as my words cannot give it full credit. Soroczynski told me I’d have no regrets in seeing the show. He was absolutely right. In Painchaud’s words, “Don’t expect anything, and just be open to be a child again.” I agree; suspend disbelief and just enjoy all of it.

iD plays at the Sony Centre for the Performing Arts until Ocotber 9th. For more information on tickets and showtimes go here. If you’d like more details on Cirque Éloize, visit their page here.