The Images Festival is full underway, yet there is plenty of artworks to take in on-screen and off. I give you a sample of my top picks for you. The festival runs at various venues throughout downtown Toronto until April 18th.

In Seeing The Past In Front of Us, takes us to the past and an agrarian existence that is disappearing around the world. Reflecting on the disappearance of agrarian existence, award winning diary filmmaker Philip Hoffman collages inter-connected Ontario histories Slaughterhouse.  Bolivian filmmaker Miguel Hilari’s cinematic observations of a remote Bolivian village point to a longing for a deeper connection with the culture of his Indigenous ancestors in The Corral and the Wind.

Tuesday, April 14, 7pm
The films and videos in Peeling back the Layers look at transformation and documentation, including a remarkably raw and moving video diary of three years in the life of a young migrant worker Guo Lifen (aka, Fenfen).  Filmmaker Leslie Tai broadcasts Fenfen’s footage on television monitors in a variety of public contexts, where the intimate and personal become universal as we all share in The Private Life of Fenfen.

Friday, April 17, 8pm
The festival is showing the new Lav Diaz film Storm Children: Book One, and a fascinating documentary fiction hybrid Li Wen at East Lake by director Luo Li, which takes us on a tour of the rapidly dwindling shores of East Lake in the ever-expanding megacity of Wuhan.

All the above screenings take place at Jackman Hall, Art Gallery of Ontario.

Saturday, April 18, 11am – 7pm
For the real film troopers, the festival is showing an 8 hour epic film Park Lanes by Kevin Jerome Everson, who spent three days shooting in a Virginian factory that produces all the components needed to build bowling alleys. The resulting work consists of a full shift, an 8-hour long portrait of a day in the life of the factory.  Screening at Gallery TPW (170 St. Helens Ave) this film duration will test your endurance.

The Private Life of Fenfen (Trailer) from Leslie Tai on Vimeo.

Tuesday, April 14, 3pm
Master Class with Cinematographer Iris Ng
Free Admission
Urbanspace Gallery, 401 Richmond St. West
Images’ 2015 Canadian Spotlight Artist Iris Ng will discuss how using a variety of different recording methods can evoke a feeling of a specific time or place. Ng will use her own projects along, with other significant works, to  break down the tangible and non-tangible cinematographic elements that combined with our memory can be used to create a desired effect.

Running until Saturday, April 25
Phantom Limbs
Scrap Metal Gallery, 11 Dublin St.
This installation brings together three distinct artworks that collectively create an elliptical passage through the human body. Imagining the body from outside to inside and back to front, the exhibition presents the human individual as a fragmented realm. Raising questions around intelligence and expression, language and perception, the works together point to the ways in which we are at once predetermined and defined by the flesh we inhabit, while at the same time we transcend these limits through various modes of communication.

Running until Sunday, June 14
Silence Please, the Show is About to Begin
Art Gallery of York University
Rashaad Newsome’s first Canadian exhibition brings together a selection of recent video, performance and collage works that explore the construction of gender, race and class. Newsome works directly with vogue ball dancers in New York and appropriates the work of hip-hop legends to create new narratives that challenge the narrow view of what it means to be black and queer.

This curated list will hopefully entice you to explore what Images Festival has to offer. This is the largest festival in North America for experimental and independent moving image culture. For full festival listings, admission prices, and more, visit imagesfestival.com. 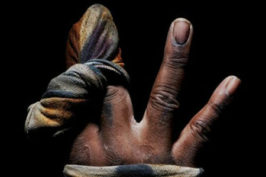 In Review: CRISIS by Nicholas Jarecki