When 12 year-old Henry (Luca Villacis) is brought to visit his isolated grandfather, he is not prepared for the harshness of winter in rural Alberta, and the tragedy that is to come.

Like many other ‘tween, Henry is not too happy about quality-time with his farm-owning grandpa Jacob (Michael Ironside). There’s no wi-fi, not even a land phone. It’s a harsh winter, and the most entertaining thing to do is shovel manure. Although his mother (Kathleen Munroe) has a worried feeling, his parents must go to a family funeral.  As such, there is no choice for Henry but to stay in the middle of nowhere.

During the first few days, Henry helps his grandpa do some minor upkeeps to the farm. After briefly bonding over their shared interest in baseball, Henry wakes up one morning to find Jacob has died in his sleep. Overnight, Henry is all by himself, without a phone, farm from any town, and in the middle of a blizzard. Makes sense, he turns to a neighbour Dixon (Munro Chambers) for help. Unbeknownst to Henry, Dixon is harbouring ill feelings toward him.

There are some murky detals about Dixon’s relationship with Jacob at this point. At first, Dixon tries to present hismself as a friend to Henry. Quite soon though, Henry discovers his mother’s hunch was pretty spot-on and he is in harm’s way. Without giving much away, tragedy follows, and a murderous storm of family secrets is unleashed.

Co-written by Michael Peterson and Kevin Cooke, Knuckleball is an intriguing thriller. Its slow start might trick you into thinking the film will go in one direction.  The mood does change significantly to full-on terror on the part of Henry. This does not mean the film does not have its flaws. As previoulsy mentioned, some details about the family secrets are murky. The other secret Henry finds in the barn is also a bit of a stretch. Also Henry’s resourcefulness (à la Home Alone) during a time of extreme terror pushes the boundaries of believability, if one is to be really honest.

Regardless, Knuckleball still hits the right notes in the last third of the film. Henry does show his vulnerability once he realises there might be no real escape from Dixon’s claws. Stand-out performances by Villacis and Chambers all around, balanced out nicely by Ironside. The film’s score by Michelle Osis and David Arcus accentuates the tension quite well.

The ending may end up a little predictable. However, Knuckleball is a decent thriller that is worth a little patience. The film opens in Toronto, October 12th. Check local listings for screening times. The film is available elsewhere on iTunes. 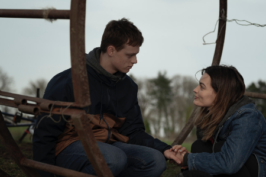