The long weekend has past and it is time to get out and enjoy some of the happenings in Toronto starting this week.

Directed by Ali Joy Richardson, The Clean House is beloved Tony-nominated playwright Sarah Ruhl at her best. After the unusual death of her parents, aspiring comedian Matilde moves from Brazil to Connecticut to clean the house of married doctors. When the husband falls in love with a patient, the household is thrown into a messy whirlwind of hilarity and heartache.  The play is an honest and funny look at class, comedy, and the nature of love.

Inspired in part by Virginia Woolf’s Orlando and Alice Walker’s In Search of Our Mother’s Gardens, Bickersteth seamlessly melds song and movement to inhabit a century of women whose identities are contained within her own.

This multi-media show features music by some of the past 100 years’ most adventurous composers, as well as projections by Germany’s fettFilm – extraordinary visuals that bring alive major art movements of the 20th century. You can read more about Bickersteth and Century Song here.

SideMart Theatrical Grocery presents the English language Canadian premiere of Illusions by one of Russia’s foremost playwrights, Ivan Viripaev, from April 21 –May 7, 2017 at Crows Theatre.

The production proudly boasts an all-starcast of two real life couples Brett Donahue, and Gemini Award-winner Laurence Dauphinais, as well as Marie-Ève Perron, and Andew Shaver.These actual relationships add a true-lifedimension to thecomplex tale of four intertwining lovers.Passion and death, loyalty and betrayal, truth and fiction, hope and despair, Illusions playfully unravels the paradoxical lives of two couples. A story offriendship, and crossed loves, this is the first English translation of the work of one of Russia’s foremost contemporary playwrights.

The April instalment of Ladies of Burlesque at The Royal Cinema takes place on April 18, 2017 at 8pm – with the screening of Jean Cocteau’s Beauty & the Beast. This essential fantasy masterpiece, with each frame oozing sensuality and surrealism, will leave you impressed. For more information on Ladies of Burlesque program, read my interview with its curator Alicia Fletcher.

The film screening is preceded by a live burlesque performance. Do not miss out!

On Wednesday, April 19, 2017 various cinemas across Toronto and Canada-wide will celebrate National Canadian Film Day. Join in the fun and celebration including screenings of great Canadian films like Midnight’s Children at the Aga Khan Museum; Thirty Two Short Films About Glenn Gould at TIFF Bell Lightbox; Cube at The Royal Cinema; Reel Injun at the Royal Ontario Museum; and various others.

Citizen Jane: Battle for the City, premieres at TIFF Bell Lightbox on Friday April 21, 2017. This is a film about cities through the lens of Jane Jacobs, urban activist, writer and author of the 1961 paradigm shifting book, The Death and Life of Great American Cities. In 1961 the book sent shockwaves through the architecture and planning worlds, with its exploration of the consequences of modern planners’ and architects’ reconfiguration of cities.

Citizen Jane: Battle For The City retraces the battles for the city as personified by Jacobs and Moses, as urbanization moves to the very front of the global agenda. Many of the clues for formulating solutions to the dizzying array of urban issues can be found in Jacobs’s prescient text, and a close second look at her thinking and writing about cities is very much in order. The film sets out to examine the city of today through the lens of one of its greatest champions.

On Saturday April 22, 2017 at 9 pm Alliance française Toronto will host the group Nhapitapi Mbira for a concert of South-African music.  Nhapitapi specializes in the mbira (thumb piano), a traditional instrument of Zimbabwe. They’ll introduce you to the traditional South African music typical of their country – the group is a six-piece ensemble of musicians, singers and dancers, who expertly weave ancestral rhythms and melodies with contemporary African flavours, conjuring musical magic in their midst. This event is co-presented with the Batuki Music Society.

Echo Women’s Choir builds bridges between communities and musical traditions in its 25th spring concert, We Can’t Keep Quiet!, Sunday, April 30, 3 pm at the Church of the Holy Trinity.  Becca Whitla and Alan Gasser conduct, with Whitla also at the piano.  Singer-songwriter Nancy White and her daughter, Suzy Wilde, join the choir as guest artists. Juno-nominated singer-songwriter Annabelle Chvostek also appears as conductor, and leads the choir in her song Firewalker.

Also on the program are cross-cultural selections taught to the choir by Hussein Janmohamed in the workshop Composing Pluralism: Music at the Intersections, combining Muslim music with music from Christian, folk and other traditions.  There will also be a  set of Georgian songs and Cassandra Wilson’s Sankofa. Pete Seeger’s Oh Had I a Golden Thread, arranged by Alan Gasser, is amongst several other songs of hope and harmony.  Leonard Cohen is fondly remembered with Sisters of Mercy.

In The City: October in Toronto 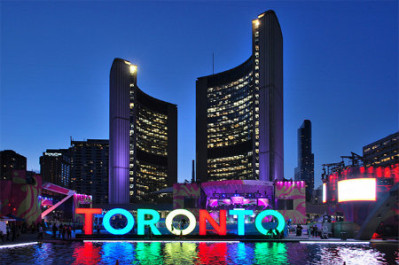 In The City: Weekday Round-Up