Does reconciliation mean the same thing to everyone, including those living on Turtle Island? Re-Quickening addresses this question, while facilitating an artistic re-awakening of her-story. KDT Artistic Director Santee Smith took time away from rehearsals to answer a few questions about the performance.

HM: Could you please share how Re-Quickening came to be; was it an idea that was born from the collaborative process among all the women involved?

Santee Smith (SS): My pivotal work tends to germinate over years as I meditate upon themes and means to communicate them. It’s hard to pin point a definitive beginning for the vision of Re-Quickening other then saying that I come from a long line of powerful Kenien’kehá:ka Nation, Turtle Clan women. Re-Quickening symbolizes ancestral continuity, perseverance and inspiration and highlights the importance of Indigenous women’s re-connection to land, title, power and body sovereignty. As the founding Artistic Director of [KDT] the vision, concept and implementation of a creation comes from me. Initial conceptual grounding includes quite a bit of research from interviews, auto-ethnography, writing and embodied exploration.

Re-Quickening themes are highly complex and multi-layered, personal and global. When the concept holds clarity, arts council grant applications are written to secure funding to bring together a creative team. For Re-Quickening, I’m deeply inspired by all of the Indigenous women artists, academics and activists who are working in a de-colonial process, Mana Wahine (Maori), and Indigenous women’s perspective. Independent of KDT, I invited Christi Belcourt, Leanne Simpson, Frances Rings (AU), Monique Mojica, Alva Jamieson, and my mother Leigh Smith to spend a weekend retreat conversing about our lives, experiences, the state of Indigenous women globally and colonial impacts on the position and power of women.

KDT then came on board to support the creation/production of Re-Quickening including a series of creation phases and residencies – working closely with Monique Mojica as dramaturge on embodied movement and text generation and Indigenous methodologies for creation. I traveled to Aotearoa (New Zealand) to collaborate with Louise Potiki Bryant on video design, and video performers Nancy Wijohn and Bianca Hyslop. The 3 live performers: Monique Mojica, Marina Avecedo (MX) and myself work collaboratively in the studio devising and distilling the concept, always in process, transformation. The team for Re-Quickening is extensive from administration, music and design aspects (graphic, costume, set, props), every layer coming into to try to hone the vision. So many voices come into the creation and production, it’s always collaborative and organic and as the Artistic Director I steer the direction.

HM: For those new to Kaha:wi Dance Theatre, can you describe some of the dance and music we will see in Re-Quickening?

SS: Re-Quickening is theatrical, stylistic movement and imagery. Three female performers move, speak, and sing in Mohawk, Guna, Zapotec, English, and Spanish. It’s okay if you don’t understand all or any of the languages. A musical score is playing pre-recorded with interwoven video projection. Expect to see: women’s bodies represented, a collision of colonial dress with Indigenous, the colour red, no ballet or contemporary dance choreographies although movement is focal. It will be jarringly beautiful. It’s not a literal narrative rather multiple layers of imagery, meaning and through lines. There is not one way to view it…the best is to be responsive. It’s both intellectual and emotional; meant to inspire dialogue. Everything that is represented on stage from gesture to image is purposeful from well-researched material. It’s ancestral and experiential truth in motion.

HM: The idea of including Q&A sessions post performance is great. Any particular guests that may be part of this dialogue series?

SS: Due to the nature of the topic – Indigenous women’s resurgence – KDT is hosting post-performance Q&A’s to open a space for audiences and artists to talk about the content of the work. KDT hopes for inspired dialogue and connections. Opening night the post-performance artist talk includes the three performers and visiting collaborator from Aotearoa (New Zealand) Louise Potiki Bryant. Louise will speak to her collaborative work on video design, rehearsal direction and significant amount of Maori – mana wahine content that supports the kaupapa (concept) for Re-Quickening. On Friday night, April 29th, KDT hosts score producer and composer Cris Derksen to speak about her work and collaboration with performance work. Saturday night April 30th, the post-performance chat includes Leanne Simpson one of Re-Quickening’s founding consultants, she will speak to her experiences and the important work on de-colonial process.

Smith points out some key elements about Re-Quickening. In my opinion, I like performances that challenge us as audiences not only in their presentation, but also in how we are expected to engage with the themes during and after the performances. This is certainly a dance piece I am very much looking forward to.

Re-Quickening runs April 28th, 29th, 30th, and May 1st at Harbourfront Centre’s Fleck Dance Theatre. All performances begin at 8:00 pm, with the exception of the Sunday, May 1st matinee at 3 pm. Reminder: There will be a post-performance circle or Q&A for audience members to exchange and engage on themes in response to the content of the performance.

Tickets for Re-Quickening are $38 and can be purchased online or by calling Harbourfront Centre’s Box Office at 416-973-4000. For more information about KDT, Re-Quickening visit Kaha:wi Dance Theatre’s website. 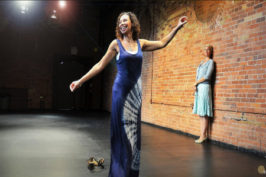