Shorts That Are Not Pants Festival will be opening their very first festival this weekend. The inaugural festival will host 50 films from around the world: Narrative films, documentaries, and animated shorts; something for everyone! Festival founder, James McNally, graciously answered my 5 Questions… to share more about the short film series and film festival.

HM: How did you first begin your short films series, Shorts That Are Not Pants?

James McNally (JM): Back around 2009, I was a big fan of a DVD compilation called Wholphin. I decided to screen a selection of short films from my collection of Wholphin issues in my apartment for about half a dozen friends. I repeated this a few times and then wondered if there might be a wider audience for short film in Toronto. I started hosting quarterly public screenings in 2012, and have enjoyed building awareness for short films and their creators. Nearly a decade later, we’re hosting our first festival weekend.

HM: From speaking with short film directors and crew, I understand this type of film can be challenging to make. Why do you focus on short films specifically?

JM: I love the variety and especially the sense of discovery. At a time when most feature films are aimed at kids or teenagers, I find a lot of joy in discovering new cinematic voices. Short films are created without a lot of commercial pressure, so filmmakers are free to experiment and express their creativity more directly. I also like that I can show a variety of different things in one screening. It’s like making a mixtape to share with your friends.

HM: Over the years, short films have become more important for film festivals and series like yours. What can you tell us about how the genre of short films has evolved?

JM: Short films have a lot more visibility nowadays, although they are still not really considered mainstream entertainment. Because they’re short, they work well online at sites like Vimeo, ShortoftheWeek, FilmShortage, and DirectorsNotes. There’s also been more acceptance for longer (>20 minutes) short films. We’re showing a 40 minute animated stop-motion film [Ce magnifique gâteau!] at the festival, and that wouldn’t have been feasible a few years ago.

JM: I’ve attended some of your quarterly series and have been introduced to some excellent filmmakers and their work. How easy (or not) is it for your team to program the series and now, your first Annual Festival?

HM: Programming isn’t as glamorous as it might appear. There’s a lot of slogging through mediocre or even terrible films. And then there are some that are perfectly good: well made, coherent, safe. I’m always looking for something a bit out of the ordinary, whether it’s a unique visual style, great performances, or a really interesting story. Short films for me have to be much more than calling cards. I’m looking for self-contained stories with developed characters that show something unique about their makers. It’s often apparent in the first few seconds of a film, but we still have to watch all the others. It’s a bit like panning for gold. Lots of dirt, but worth it for the occasional shiny nugget.

HM: For this first Annual Festival, can you expand on the variety of shorts you’ll be showcasing?

JM: We are showing 50 films from Canada and around the world. We are featuring narrative, documentary, and animated films, and will be awarding a film from each category as well as an overall Audience Award. Each award will come with a $250 cash prize. Each of our six shorts blocks contains a mixture of films which we hope will entertain and inspire our audience, some of whom will be filmmakers themselves. There are local films in each block and we’ll have some of those filmmakers present for post-screening Q&As. It will be a real celebration of short film and short film creators.

The Shorts That Are Not Pants Festival will take place November 23-24 at Cinecycle. For full festival listings, showtimes, and tickets, please visit shortsnotpants2018.eventive.org. 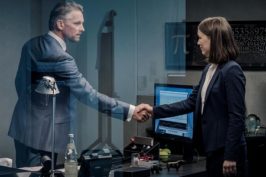