The Canadian Alliance of Film & Television Costume Arts & Design (CAFTCAD) is an association of individuals interested in promoting costume design for film, television and media from both an artistic and technical perspective. Their vision is “to increase awareness and the value of costume arts and design as a powerful element in the collaborative process of filmmaking; furthering international recognition of the creative talent we have in Canada”.

CAFTCAD’s President Joanna Syrokomla took the time to answer some questions about the organization, its resources, and Edith Head.

HM: Being a costume designer yourself and being a founding-member, could you please share how CAFTCAD has grown over the years?

Joanna S.: CAFTCAD has grown not only in its membership since our incorporation in 2008, but through the creation of new seminars and new events to bring a greater awareness of Canadian costume design and arts and of our members and their work. Through the success of our bi-annual Movie Wardrobe Sales and our social events at TIFF, the film and fashion communities are becoming very familiar with our organization and our members are creating stronger relationships with fashion retailers to get their products to the screen.

HM: CAFTCAD offers some great resources for members, including a Resource Library. Perhaps you could say more about these?

JS: Our resource library is made up of mainly donations from members of the costume film community. We’re quickly building an exceptional collection that members can access as well as non members for a voluntary donation fee. Another huge resource for members is our online forum where we can ask questions, share contacts and information and look to hire other members for our film and television projects.

HM: Edith Head is an inconic figure in the industry. How did the stage production A Conversation with Edit Head come to CAFTCAD’s attention? Was it difficult to bring to Toronto?

JS: Our past president, Luis Sequeira had heard great reviews of the show in Los Angeles and suggested we look into bringing it to Toronto as Edith Head is an icon to costumers everywhere. When speaking to Susan, the show felt so right for CAFTCAD and we wanted to present its Canadian premiere. The desire to bring it here was never in doubt but the challenges of producing the show in Toronto have been based purely on the fact that CAFTCAD is a not for profit association run entirely by enthusiastic volunteers.

HM: Since Head worked for six decades in the industry and seeing as many costume designers are women, any thoughts on how this show can help more of us learn about costume design and those who work in the field?

JS: Every time I’m even in the room with another designer, whether female or male, I learn something new. There are so many tricks, so many stories that each have that we can learn from and laugh about. Because the more we laugh, the easier it is to get through what is often quite a challenging profession. I look forward to hearing ‘Edith’s’ stories of dressing some of the most famous people in the world. I think this show will inspire and remind many of us in the industry why we decided to do this in the first place.

For any of us who love films, or performing arts in general, costumes become an added character in the stories. It is always interesting to learn who plans out the costumes so meticulously, and creatively. Joanna’s responses definitely share some light in the local talent as well. At a reception CAFTCAD hosted for Susan this week, Joanna also shared with me that several CAFTCAD members have been nominated for the Canadian Screen Awards in the category of Costume Design — announced Monday this week. Congratulations to all the nominees this year:

In terms of the play, A Conversation with Edith Head is a behind-the-scenes feast of great movie lore and delicious stories providing insight into Hollywood’s legendary costume designer, Edith Head. Audiences hear Miss Head tell her own story. It’s a tale filled with humour, frustration and glamour. After speaking with Susan at the reception earlier this week, I am very much looking forward to it. 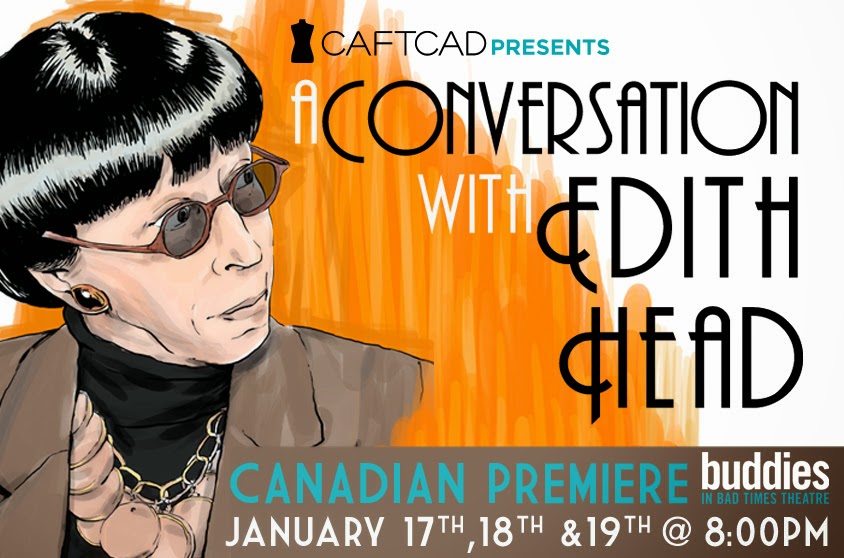