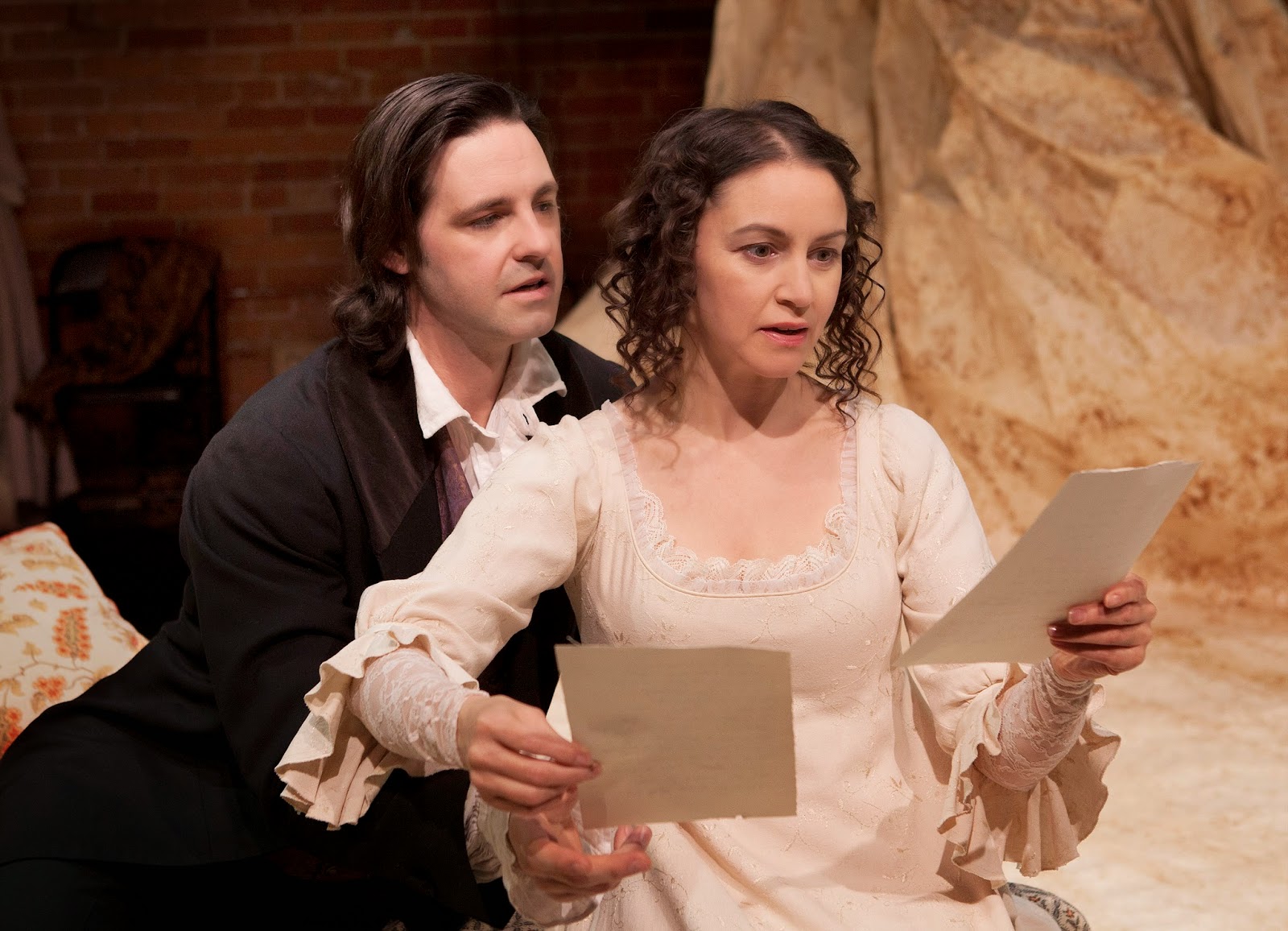 Canadian Rep Theatre‘s presentation of the Toronto premiere of How Do I Love Thee? by Florence Gibson MacDonald opens tonigh, February 5th, at the Berkeley Street Upstairs Theatre. Directed by Canadian Rep Artistic Director Ken Gass, How Do I Love Thee? is a language-rich exploration of both the euphoric and darker sides of the marriage of Elizabeth Barrett Browning and Robert Browning, Victorian-era poets who enjoyed “rock star status” at the heights of their careers.

This exploration of the intricacies of love, creativity and addiction features a great cast with Irene Poole and Matthew Edison as Robert and Elizabeth, Nora McLellan as Elizabeth’s maid Wilson, and David Schurmann as John Kenyon, Elizabeth’s distant cousin and friend of Robert.

Following the euphoria of a heady courtship carried on chiefly through letters, Robert elopes to Italy with Elizabeth, only to discover her lifelong addiction to opiates which fuel her relentless creativity.

Playwright Florence Gibson MacDonald noted her “inspiration for this play came from a most unlikely source: the British Medical Journal wherein several doctors in the 1990s engaged in a lively discussion about Elizabeth Barrett’s illness.” It is on this note, that I took the liberty to ask MacDonald more about the play, and its inspiration.

HM: Since How Do I Love Thee?‘s premiere in Alberta, has any material changed in the story or overall play?

Florence Gibson MacDonald: Yes, there have been significant changes. Ken Gass, Artistic Director of Canadian Rep, and I went back to a previous draft of the play and worked from there. We both felt there were elements, in the second act primarily, that deserved a second look. So although there are no major changes to character or structure, the lives of the Brownings after their marriage has been expanded to include things like the birth of their son, Pen, Elizabeth’s interest in Italian politics, the writing of Aurora Leigh- all things that created friction in the marriage! This resulted in changing the act break as well.

HM: It is very interesting how you were inspired to write this play when noticing Elizabeth Barrett’s illness was often mentioned in the British Medical Journal. Is this an important aspect of her and Robert Browning’s courtship, you think?

FGM: Elizabeth’s addiction to opiates is, of course, a game changer in their marriage. Especially since Robert knew nothing about it until they’d lived in Italy for a month and there was no money to pay the bills! But equally important, I think, is the fact she became dependent on her drugs to write. The play explores the effect of drugs on creativity.

HM: Given the great poetic correspondence between Robert Browning and Elizabeth Barrett, how did you go about choosing which of these would be quintessential to the play?

FGM: I have only used excerpts from the first few letters. From there it became my own invention, in order to make it dramatic, and to compress the correspondence phase of their relationship- which lasted a year- into a time frame that could be conceived on stage. Of course, I had to use that famous line from Robert’s first letter to Elizabeth, “Dear Miss Barrett, I love your verses with all my heart, and I love you too!”

Oh, that first letter! I remember I learned about both poets in my high school years, knew a bit about Elizabeth’s addiction, and of course, am a fan of their lovely sonnets. Knowing how MacDonald aims to tell their story, I am definitely intrigued about How Do I Love Thee? It will make for an interesting evening at the theatre, as well.