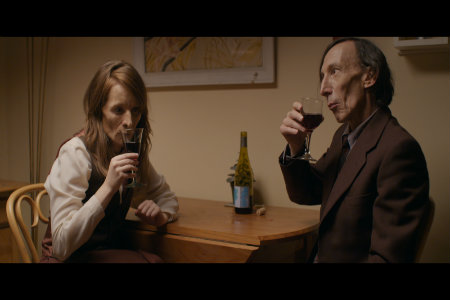 Part of TIFF‘s Shorts Cut Programme 5, Zack Russell’s first short film, She Stoops To Conquer is set to premiere at the festival this Sunday, September 13. The film is about a struggling talent-show performer wanders into a nightclub disguised in a mask, and is inexplicably attracted to the real-life doppelgänger of her masked character. Having screened this curiously entertaining film, I took the liberty to ask Russell a few questions.

HM: For those who have yet to see the short, did the story idea come from Kayla’s experience as a comedian or is it a combination of ideas by both of you?

Zack Russell (ZR): It’s a combo of the two. Kayla does play old men in her comedy. When we first started talking about the film, she’d just finished playing a string of older male roles on stage. But it was more a jumping off point – a premise that sparked the weirdo story you see in the film. And there’s the fact that the character she plays in the film is a gay man… I guess we kind of smashed our identities together (female performer / gay man) and worked from there.

HM: This film was partly funded by an indiegogo campaign, how did that influence what you could or could not do in terms of production?

ZR: We definitely never felt beholden to anyone – even the producers who came onto the project with large contributions via indiegogo were very hands-off. So the whole film was made in this little bubble. I think short films are often made that way – they’re small enough, and the possibility for commercial success so slim, that you can work under the radar and do your own thing.

HM: After Julian Richings agreed to have his face ‘copied’ AND also be part of the film, did you ask him for any input on how Kayla was to play that character ‘in drag’?

ZR: Right away Julian made it clear that he was more interested in adapting to Kayla’s performance than creating something for her to emulate. He was also incredibly generous with his time, workshopping the script and rehearsing with us over several months. By the time we shot the film, they’d already spent so much time together I think the character had evolved pretty naturally.

HM: Personal opinions aside, how do you explain this film as a ‘romcom’? I am intrigued.

ZR: I’m kind of winking when I say ‘romcom’. But at it’s core, it’s really a film about personal chemistry between two outsiders. Maybe I’d say it’s a romcom dressed up in freaks’ clothing.

HM: Congratulations on your big TIFF premiere, by the way! After this festival, what are the plans for this film?

ZR: We’re screening the film at a bunch of festivals this Fall – Vancouver, Atlantic, Edmonton, New Orleans and then Raindance in the UK. And we’ve started working on a feature that’s loosely inspired by the short. More on that soon!

Sounds like quite the journey for this short film, Russell and team. This interestingly funny and curious short film is definitely one to add to your list as it is also in very good company in TIFF’s Shorts Cut Programme 5. There are so many gems to be found in short films, that I cannot recommend you check this programme and others at the fest this year.

She Stoops To Conquer and Co. screen twice at TIFF; Sunday, September 13 and again on Saturday, September 19. For more information on TIFF, this film and others, please visit tiff.net.

She Stoops To Conquer – Trailer from Zack Russell on Vimeo.