Writer and performer Alex Eddington is a Canadian Fringe veteran who has toured his work to 25 festivals in 11 cities, since 2005. This year, he brings Life List – a site-specific walking tour combining true stories, live music and actual birdwatching – to the Toronto Fringe Festival.

Life List finds a balance between autobiographical storytelling and magical realism. Equipping the audience with clipboards and binoculars (you are encouraged to bring your own, if you have some), Eddington leads you on an expedition to find the White Robin, a bird with rare colouring that has been spotted around Seaton Village.

Along a winding route through back alleys and secret pathways, spurred on by clues that might point to the bird’s whereabouts, Eddington tells stories about his burgeoning relationship with birdwatching. Before his mother died of breast cancer in 2014, she passed on her “life list” – a book of unique bird sightings – and asked him to continue adding entries. The anecdotes vary depending on what real birds appear along the route, but all lead back to his mother, his pet bird Spike, and the cancer that took them both.

Eddington took the time to answer a few of my questions in order to learn more about Life List, and his work in general.

HM: For those who have not been to one your previous shows, what can they expect from Life List?

Alex Eddington (AE): Life List is definitely going to be different than any show I’ve done before. For starters, there is no ceiling. Or walls. It’s a site-specific show without a site. And it’s partly improvised, which is also new for me.

However, Life List fits in with the theatre I’ve made before in some other ways. Like, I’m telling true stories in a way that is somehow both casual and intense. It’s made of a bunch of smaller stories that don’t seem fully related, but which start to accumulate and resonate into a bigger story. It starts out being about one straightforward thing, but becomes a show about something quite a lot more ethereal. It observes the natural world keen-eyed, while occasionally flirting with the supernatural. It [also] pops in music – some of it new, some familiar – in unfamiliar ways.

My last show Yarn had all these things… plus quite a few stories about birds. Gosh, The Fugue Code back in 2007 had birds in the set and sound design! Old Growth in 2008 was big into ravens. I do love birds.

HM: What is “magic realism” to you and how is it a part of Life List?

AE: “Magic Realism” is blending real things into unreal things, in a gradual way so that hopefully my audience is not sure when things stop actually being real. I want to build belief in the unreal things – to trick us into momentarily believing in something magical.

In Life List, when we are first looking for the White Robin it’s a very natural activity. We’re using binoculars and plotting the locations of birds. We’re noticing things that the local community has done to try to protect this bird. But as we go along, the audience tasks and the evidence of the bird gradually gets weirder – more abstract. There are quite a few little surprises along the way. And this is meant to parallel the way that the stories I’m telling get darker and more personal and less about birds and more about loss.

HM: Do you find Life List has helped you in processing the loss of your mother while at the same time honouring her life?

AE: It’s such a long process. People tell me it will take me the rest of my life. Losing a mother is such a profound thing. But sharing stories about her does help. It’s really the best thing – keeping her memory alive. I actually started telling these stories – particularly about Mom and our pet cockatiel Spike – two years ago when we knew she was dying, but when as it turns out she still was going to live about six months and have an incredible last summer.

I shared some of these stories to an audience of thousands of people at the annual Gilda’s Club fundraising gala at the Sony Centre, along with my father. Now I’m channeling the process of loss into creating a theatre piece, but not in a direct way – it really is a show about the wonder of birds as much as it is about her. And I suppose that I’ll keep discovering new ways to honour Mom as it all goes forward. We have a bench dedicated to her, in a lovely park near our house – that helps. So does the garden she planted, which is now our garden.

HM: How long did it take you to map out the location / tour walk for the show?

AE: Off and on, a few months. It’s a very different route now than when I first proposed the site-specific show to Toronto Fringe. Back then (last winter) it was about going between city parks. But Google Maps is no way to plot a walking tour. When we got on the ground, the parks seemed too far apart. We still go to a couple of them, but the route is now about finding little unexpected nooks and crannies. We travel as much as possible away from the regular streets, favouring alleys and tiny little rights-of-way. There are incredible bird-filled trees in those places.

Also, SHHHH but it’s meant to seem like our route is spontaneous so FORGET ALL THAT. WE DIDN’T PLAN IT AT ALL.

HM: Thank you for sharing a part of your life with us through Life List. What else are you working on for the near future?

AE: So many random things! The composer side of me has the most going on right now. The Scarborough Philharmonic Orchestra just recorded a piece of mine for a CD of Canadian music that will be coming out next year. I’m setting some of Dennis Lee’s childrens’ poetry to music (for the second time!). And I just got a big musical commission for orchestra that I actually can’t tell you about yet.

On the theatre side, I’m wondering how we can remount Life List in other neighbourhoods, in other cites, and even some day as an indoor show (if I’d even want to). I’d like to remount Yarn but WOW that show is a lot of work to put up. Also I’m trying to find a permanent teaching job (I teach grade 7-12 music and drama). I’ve had some wonderful short-term jobs but I’m ready to really settle in to a school.

Oh yeah and we’re helping our baby grow up into a person. It’s going really well so far!

Well Eddington sure knows how to keep creatively busy while also enjoying time with his family. Join Eddington on this Life List journey at the Toronto Fringe Festival between June 30 and July 10. This is mostly an evening event, with some matinees on Saturdays and Sundays. Dress for the weather and come prepare for a 25-minute walk. For more show listings, box office and festival information, please visit fringetoronto.com. 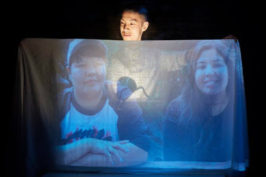 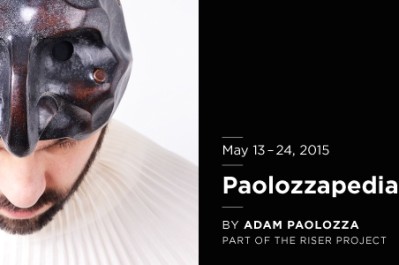 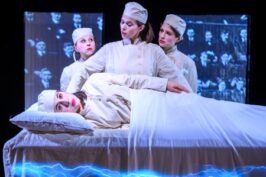