Shakespeare BASH’d returns to the Monarch Tavern with an exciting new staging of Richard III. Co-Artistic Director James Wallis returns to the stage to play the title role; while Jennifer Dzialoszynski (Shaw Festival) navigates a complicated path as Lady Anne.

Both Wallis and Dzialoszynski share some insight into this play and their respective characters.

HM: From what I know about Richard III, Richard’s character changes and shifts a lot throughout the play. How do you prepare for such a complex role?

James Wallis (JW): I think for me, Richard clearly states what he hopes to achieve in the opening monologue. He wants to be a villain. By that, I think, he wants to create Chaos. Absolute and uncanny. Richard goes through the play manipulating and combating with people over anything he wants, in order to get what he needs.

I started by just trying to understand, on a base level, what is Richard saying at all times? How does he speak in soliloquy and how does he speak to others in the world of the play? I found that he was simple and plain with himself and the audience; and then, overtly hyperbolic or sentimental with others. What kind of person is like that? Physically it’s been trickier because, what is the deformity of Richard? I didn’t think we needed to go too realistic and kept it simply a hump that he hides. We’ve been working with Brad Cook, who is an amazing movement coach, to specify the action of Richard (the walk and stance.) All in all, it’s a fun but difficult character to fully understand, but therein is the exceptional challenge that I have the great gift of taking on.

HM: Is Richard an anti-hero… what is your opinion of this character?

JW: Richard is a villain, through and through. He hates people. He despises the garbage people that are in front of him; he loathes Elizabeth and her family, especially the two young princes; he rejects his brothers’ love and pathos; and he loves to take away from Lady Anne anything he wants.

To say that Richard is an anti-hero is to assume he wants anything more than to watch the world burn. He takes the crown when he gets it, but is left to govern, which he doesn’t have the patience for. He wants to drive the world to a state of mistrust, suspicion, war, and death. That’s real meaning to him. That’s being a villain. But interesting even despite going towards that, he’s left conscious stricken at the end. He’s guilty and he feels it and knows it. As our director Julia Nish-Lapidus so eloquently put it, “though he wants to be something else, something cut off from everybody, like a villain, he finds out he’s a human being and can’t be anything else.”

HM: With your great experience on-stage, how do you prepare for the role as Lady Anne?

Jennifer Dzialoszynski (JD): I think Anne is a really challenging role, and I was really nervous about it. (“Was” might be the wrong word…maybe “am,” is more accurate.) What really helped me was just focusing everything on the text, and remembering the size of this kind of play. I had to remember that we’re not in naturalism, it is Shakespearean in the size and scope of the story. Trying to fathom how a person can begin a scene spitting venom at their mortal enemy, and finish it betrothed to that same person was overwhelming when approaching it with my 2018 sensibilities. But by really using the text, and imbuing it with the larger than ‘real life’ qualities that come out with Shakespeare, I hope I’ve managed to find a person that even during the 180 degree turns is a relate-able, strong, damaged, warm, vulnerable, fight-til-the-death kind of woman.

HM: Let’s be honest, Richard is not too kind to Lady Anne. How did you and James approach the dynamics of these characters’ relationship?

JD: I mean, if we’re being honest, “not too kind,” is a gigantic understatement. Plainly put, he uses her and murders her. The end. It is completely horrible, and for me as Anne, I can never play the ending; otherwise I wouldn’t make it into the scene. For the dynamics, we really tried to zero in on who is winning and losing the battle at any given moment. The word play is really biting, especially off the top of the scene, and for a while Anne wins. But Richard, instead of letting Anne’s victories beat him, finds a way to use them to his advantage. Once he figures out that one course of action isn’t going to work, he can change to one that will. Anne certainly lets him know that flattery isn’t working, and with this knowledge and from Anne’s behaviour Richard figures out what will. “If at first you don’t succeed, try, try again,” is definitely at work here.

HM: The play clearly depicts how a ruler abuses his power and how the masses remain blind to such a false ruler. What are your opinions on the relevance of Richard III and other Shakespeare pieces in our current times?

JW: I feel that the world reflects Shakespeare as much as Shakespeare reflects the world. If we had a different situation with the United States politically, would Richard III seem so relevant? But we have the unfortunate situation that we have and we are doing this play, so the comparisons are going to be brought forward.It’s going to be ambiguous because, to me, Shakespeare works best that way, but possibly there’s a hopeful ending. Chaos can end. The villain will fall. Good will prevail. We may be fascinated by the charming lunatic, but the will of humanity is that evil will be defeated.

JD: I don’t know about you, but I can tell you exactly where I was, and how much I wanted to vomit on November 8, 2016. I hid under a blanket with my laptop torturing myself by watching the coverage for several hours after the results came in. Art imitating life, life imitating art. One of the most enlightening lines in the play, I think, is Richard’s line, “Richard loves Richard.” I find this an incredible similarity between the tyrant in our play, and the tyrant sitting in the White House. When a person in a position of power can only see themselves in any given situation, when empathy, logic, a basic sense of decency and equality is lost, then so are all of us.

Richard III is a classic that remains all too relevant in today’s political climate. Exploring the abuse of power and the ability of the masses to remain blind to a false ruler, this production will leave us with plenty to discuss afterwards. Richard III runs February 6-11, 2018 at the Monarch Tavern. Ticket range between $20-25, please visit shakespearebashd.com for more information. 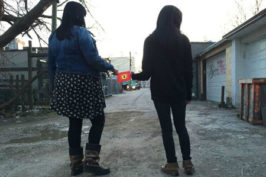