El Retorno/I Return is a search for answers to childhood questions when, for one year, Nuñez’s family was part of The Return Plan – the return to Chile to help fight against the brutality of the Pinochet dictatorship.

Having followed Nuñez’s trajectory, and knowing her through mutual friends, I know this is a story she has been aiming to tell for many years. El Retorno signifies a chapter in the playwright’s life that needed to see the light of day.

Using verbatim interviews and fragmented memories, Nuñez shares a very personal and political journey into the heart of Chile.

I had the pleasure of attending a performance with a close friend of mine from who is also from Chile. This is what she shared with me about the piece: “El Retorno touched on so many points that affected the childhoods of those of us who had to witness our parents leave everything behind. The trauma that permeated dreams, thoughts, and even play time.

The music and the visceral nature of the dialogue when forcing the audience members to ‘remember’ really struck a chord, and allowed those of us with similar experiences to really dig deep and realize that the possibility of finding peace within our own traumas is indeed possible.

“I’m not from here, I’m not from there,” really defined an entire generation of children of exile. I’m grateful that Marilo Nuñez has found a way to reconcile these tugging struggles that on some level still live within us.”

I could not have described the piece in a better manner. I am not from Chile, nor did I leave Guatemala due to political upheavals. As an immigrant however, El Retorno touched upon many of my own thoughts and feelings. All of us who have immigrated from somewhere else, carry fragmented memories of our past and our homeland that will forever define us. These memories also characterise how we view the world, and how we interact with each other.

With set and projection design by Peter Riddihough, costume design by Kelly Wolf, sound design by Michael Rinaldi, choreography/movement by Olga Barrios, El Retorno is a well-balanced piece. All technical elements work well together in setting mood, time, and place.

Also kudos to the entire cast featuring, Alejandro Ampudia, Anita La Selva, Ximena Huizi, Augusto Bitter, and Sofia Rodriguez. Not an easy piece, but one in which all play equally important roles.

For anyone who has had to left ‘home’ due to political problems, war, or any other reason, the themes discussed in the play are poignant, heart-hitting, and all too true.

El Retorno continues as part of the RISER Project until Saturday, May 13th. Online tickets have sold out, but try for same-day tickets by calling The Theatre Centre’s box office at 416-538-0988. 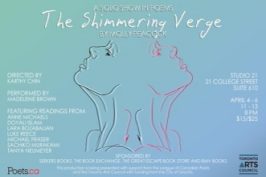 The Shimmering Verge: a solo show in poems by Molly Peacock