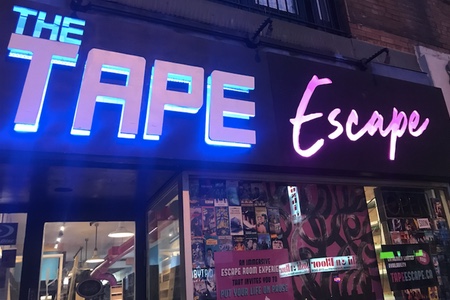 Outside the March (OtM) celebrates its 10th season with their newest immersive experience The Tape Escape — Created by OtM’s Founding and Artistic Director Mitchell Cushman, Vanessa Smythe, and Nick Bottomley, The Tape Escape will unwind in an installation of over 5,000 VHS tapes (designed by Anahita Dehbonehie and Nick Blais) being staged at the former Annex Queen Video location on Bloor Street West.

To find out more about this immersive experience, Mitchell Cushman took time away from the video story to answer my 5 Questions With… series.

Mitchell Cushman (MC): We live in a time where it has never been easier to plug into passive entertainment, from the comfort of your own home, on your phone, on your watch even. So I think for theatre to thrive, it needs to be embracing and celebrating the unique power it has to bring people together, for an unrepeatable communal experience. When I look back on the work we’ve created with OtM over the past decade, I’m very proud of the visceral, memorable, epic and intimate experiences we’ve offered that could not have existed in a different medium.

HM: You co-created The Tape Escape with performance poet Vanessa Smythe and video artist Nick Bottomley. Could you describe a little bit about your collaborative process… Essentially how you went from idea to start of production?

MC: Vanessa and I were chatting a few years back about our nostalgia for video stores, and how they were almost extinct. She mentioned she thought a video store would be a great environment for as site-specific show, and my ears perked up. I’m always on the lookout for spaces that come with their own aura, that the audience will have their own sense-memory for – which video stores have in spades, especially for people of a certain generation.

The exciting things about working with Vanessa and Nick on this show is that it’s been such a unique piece to create, that it’s pushed us all very much out of our comfort zones. I’m typically a director, Vanessa mostly worked as an actor and a writer and Nick as a video designer – but on this show, we’ve all done a little bit of everything – including designer a few dozen escape room style puzzles, which was brand new for all of us. It’s been exhilarating – if daunting in moments. But I couldn’t ask for two better, more passionate or inspiring collaborators.

HM: I’m curious if you knew early on in the process that you’d use Queen Video’s former store as location for The Tape Escape?

MC: We didn’t. We’d been looking for the right venue for almost six months when Queen announced it was closing. We knew we were looking for a space downtown, with a lot of walk-by traffic, but I never thought we would end up in an actual historic video store. But we made contact with Howie the owner of Queen, and he got incredibly excited about what were were looking to do with the space – to honour what it had meant to the neighbourhood and his customers over the years. He even donated to us all of the stores shelves, which we’ve refashioned into something of a maze – not to mention reuniting them with 5000 VHS tapes! We’re thinking of it as something of a wake, not just for Queen, but for all Toronto’s dearly-departed video stores.

HM: In The Tape Escape, the audience will immerse themselves back in time in 1999. Why this specific year?

MC: We knew we wanted to set the piece squarely in the VHS era – in fact, our piece takes place in a somewhat fictionalized version of ’99, one where DVDs don’t exist. With the millennium and everything, 1999 also seemed like a threshold moment to capture – the piece is all about those threshold moments – in fact, the specific day in question the piece is trapped in (a la Groundhog Day) is August 31st, 1999 – a double threshold date – the last day of summer, in the last year of the millennium. Also, 1999 is considered by some to be a historically good year for movies. Esquire Magazine even dubbed it as “the last great year” for film.

HM: I think audiences should hear more about what’s coming up in the season. I’m looking forward to The Popcorn Double Feature overall. Can you please share a little bit about the other upcoming production, The Flick?

MC: The Flick is written by Annie Baker, who to me is the single most exciting playwright working today. I had the pleasure of directing another one of her plays, The Aliens, a few years back for The Coal Mine Theatre. And that piece was beautiful, but The Flick is really her masterpiece. She has such an uncanny understanding of what it means to be a young person today. And with The Flick, she encapsulates that adolescent time (again, threshold moment) perfectly with the metaphor of the transition from film to digital.

The Flick is set in an old movie theatre, and we’ll be transforming Streetcar Crowsnest to fit the part – you’ll be able to buy popcorn and chocolate to munch on during the show – though you might feel a little guilty if you spill any, as the play’s protagonists spend virtually the entire show sweeping up popcorn. I like to refer to it as if Waiting for Godot and Empire Records had a baby. Nothing happens, except that everything happens. That’s Baker’s gift, and I can’t wait to share The Flick with Toronto.

For advance tickets and additional detail on both The Tape Escape and The Flick, please visit outsidethemarch.ca.

Spread the love
Tags:Featured Mitchell Cushman Outside the March The Tape Escape 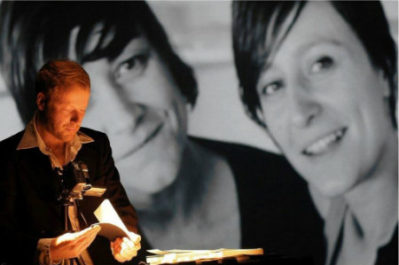 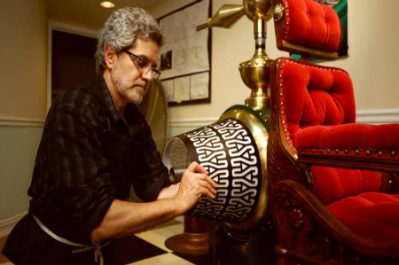