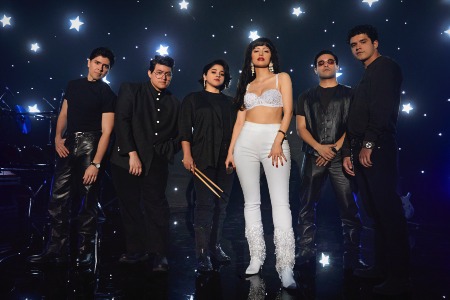 Before she became the Queen of Tejano Music, Selena Quintanilla was a young girl from Texas with big dreams and an even bigger voice. Selena: The Series explores her journey from singing small gigs to becoming the most successful female Latin artist of all time — and the years of hard work and sacrifice the Quintanilla family navigated together.

The upcoming series will premiere on Netflix on December 4, 2020.

For many of us fans of Selena, we saw her grow up through many Latin-American shows we watched with family back in the 90s. Her exuberance, great talent, and humbleness made her an instant favourite.

Selena: The Series is a coming-of-age story following Selena as she chases her dreams, and the heart-wrenching and life-changing sacrifices she and her family make as they navigate the highs and lows of success, loss, love, and music.

I, for one, am looking forward to series. Until December 4 comes, I share with you some pictures from the series’ production where Christian Serratos really has become Selena.

All photos by Michael Lavine.