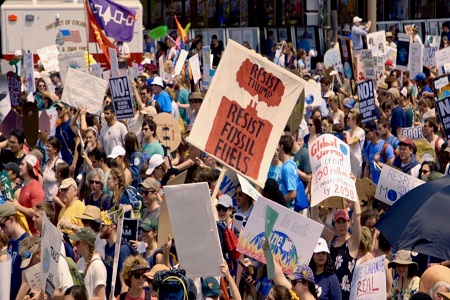 Through this film, Slater is making her mark, and also capturing the inspiring voices of many young people who are determined to fight for a future that is clean, green and friendly to the environment.

Slater takes us on a journey documenting the rise of the Global Youth Climate Movement through rallies, international social media exchanges and at major Climate Change Conferences. She shares with us how the Copenhagen Climate Conference “felt like a betrayal”, and how “Nepal profoundly changed me.” As she films herself and her counterparts over the years, we see them grow up… just like the “youth climate movement grew up in Paris since Copenhagen.”

In 2015, Paris was in a state of emergency due to terrorist attacks. Yet members of the youth climate movement organised many actions/protests. Their chants, “We are unstoppable, another world is possible.” It was in Paris that 200 countries agreed to cut carbon emissions thanks to the efforts of many developing nations with major support from then US President Barack Obama. Soon after, Donald Trump becomes US president. The US is the only country that does not want to join Paris accord.

The need for public outcry and the youth climate movement is more important now than ever. In the film, we meet young people whose families are directly affected by climate change. Slater also reminds us how in Canada, the impact oil sands are having on the Indigenous communities’ way of living. In the words of Slater’s hero, Jean-Michel Cousteau, humans are the “only species on this planet that can decide not to disappear.”

Youth Unstoppable connects us with activists of the next generation. This is the story of the youth of today fighting for their planet, their future. This inspiring documentary opens the 19th edition of Planet in Focus tonight at The Royal Cinema. The festival continues to October 28, 2018. For film and event listings, and tickets, please visit planetinfocus.org.

Slater Jewell-Kemker talks about her film Youth Unstoppable from Connect4Climate on Vimeo.