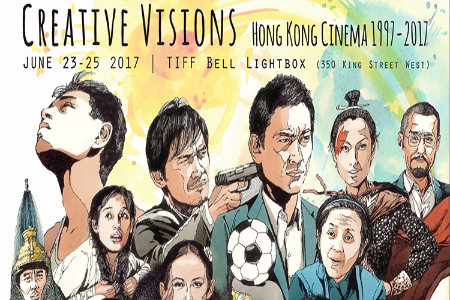 The Toronto Reel Asian International Film Festival (Reel Asian), in partnership with Create Hong Kong and the Hong Kong International Film Festival Society with support from the Hong Kong Economic and Trade Office in Toronto (HKETO), announced today the details of Creative Visions: Hong Kong Cinema 1997-2017, a weekend of free Hong Kong films in commemoration of the 20th anniversary of the establishment of the Hong Kong Special Administrative Region (HKSAR). Toronto has the special distinction to be one of the only 11 cities in the world selected to host this event. Creative Visions: Hong Kong Cinema 1997-2017 runs June 23 to June 25 at TIFF Bell Lightbox.

This event will feature eight specially curated Hong Kong films from the past 20 years, and will welcome director Heiward Mak who will take part in an artist talk and will introduce her critically-acclaimed directorial debut High Noon.

The films, many of which will screen in archival 35mm print, present the wide range of films produced by Hong Kong and include works by both internationally renowned Hong Kong directors like Johnnie To and Wong Kar-wai, and filmmakers like Pang Ho-cheung and Heiward Makwho who emerged in the last two decades.

I have seen many of these films. Although I like them all for various reasons, I highly recommend trying to see Infernal Affairs, Kung Fu Hustle, The Grandmanster, and  High Noon on the big screen. They are all epic in their own way.

Free Admission for all films. Reserve your tickets online. If you do not see tickets available or films not listed, do not despair! Tickets also available before each show at the TIFF Box Office.