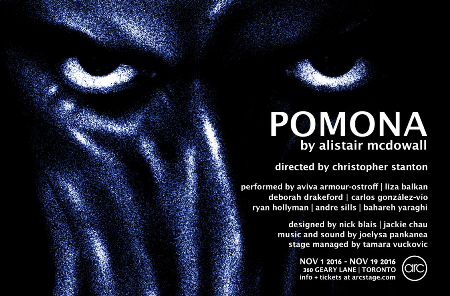 ARC brings to Toronto the North American premiere of Alistair McDowall’s Pomona. Running from November 3 to 19 at 360 Geary Avenue.

A woman is missing. Her sister is searching. As she comes closer to revealing the dark truth, the fabric of her own life becomes twisted into a strange loop until she can no longer be sure what is fantasy, what is myth, and what is the very real result of a society conditioned to look the other way in the face of human evil.

Director Christopher Stanton descibes, “It’s scary. It’s strange. It’s hilarious. It’s absurd. But it’s also deadly serious. Pomona examines action and inaction in the face of some of the ugliest truths. How we turn terrible realites into stories, and then compartmentalize or ignore the stories.”

The fourth play from UK’s Alistair McDowell, Pomona was commissioned for The Royal Welsh College of Music & Drama in 2014 and performed at The Gate Theatre in London as part of the NEW festival of plays. The production was a critical success and was featured in Lyn Gardner’s Top 10 Theatre of 2014 in The Guardian. She cited the play’s humour and moral ambiguity, and called it “a dark, fractured and deeply unsettling theatrical weapon.” Time out London called the play “an extraordinary cocktail of brutal thriller, sweary magical realism and HP Lovecraft references.”

Reviews aside, the themes explored in Pomona are timely and thought-provoking. Be sure to head to 360 Geary Avenue, November 3-19, to explore the intricacies of life in this play.