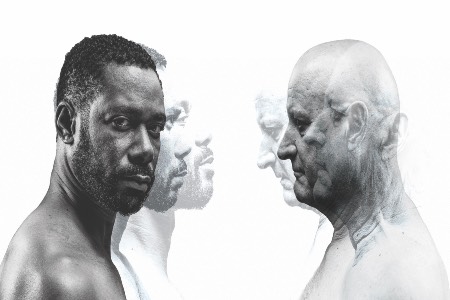 Under Chris Abraham’s direction, this Julius Caesar is staged in the round. This allows for a better us of space and different vantage points of the Guloien Theatre.

It all starts with a radio show set up of sorts, which helps set up the scenes we are about to witness. Thanks to this initial set up we travel from classical Rome, Elizabethan England to our current moment of global tumult. I appreciated this way of introducing the story.

This modern production introduces us to the group of individuals who convince Ceasar’s friend Brutus (Dion Johnstone) to join in the assassination plot agains Caesar (Jim Mezon). Their reasoning, to stop Caesar from gaining too much power.

Mezon is strong as Ceasar in a silent way; especially when seen as a ghost. Johstone is also very strong as Brutus, who is living a moral dilemma; complex character. He must make the difficult choices and decisions. O’Connel is good as Cassius; her performance gets better as the play progresses.

The second act focuses on the civil war that comes post assassination. We feel and see the physical pain everyone experiences. We also see how both physical and psychological pain leads to Brutus’ mind falling apart so to speak.

This new production re-unites director Chris Abraham, Graham Abbey (Marc Antony) and Dion Johnstone after their celebrated collaboration on Shakespeare’s Othello at the Stratford Festival in 2015.

Savoini’s lighting: bring yellow circling the floor when tensions are high; blue for when the ghost of Ceasar appears to Brutus.

Sound design by Thomas Ryder Payne is powerful in various ways; especially to compliment key scenes. The pre-lit candles for Caesar’s funeral are a nice touch, which allow audience members to be more immersed in the events.

Abraham’s production of Julius Caesar also features new writing by frequent collaborator Zack Russell which grapples with the rise of authoritarianism and the ethics of violence as a tool for political change.

I understand the violence (self-inflicted and otherwise) might trigger some audience members. Nonetheless, this is a production that helps make Shakespeare more relevant and more importantly, more accessible. This is the type of production we should be seeing more of. 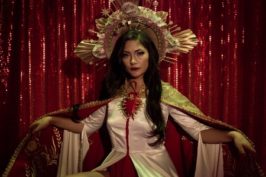 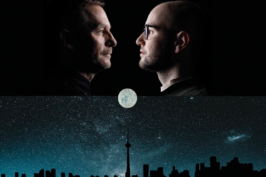