Presented in an intimate twenty-seat room in the Gladstone, Shadow Girls invites audience members to experience transformative images as it details the relationship of Maggie and Amelia: two women whose attempts at an intimate relationship with a complicated history involving years of separation following an adolescent hook-up-and-break-up. The projections translate the shadows of the women’s inner emotional worlds, and evolve in real time at the hands of three observable projectionists.

Shadow Girls was written by Keshia Palm and Claren Grosz, two queer theatre artists who drew on their respective backgrounds in puppetry and visual art to conceive of the hyper-visual art installation nature of the production. After being workshopped as part of the 2017 Rhubarb Festival, the piece is now being staged by an all female team under the direction of Claren Grosz (Macbeth, Persephone, CHICHO) and stars Sofia Rodriguez (Princess Knight) and Liz Der (The Ballad of Sadie Wong).

Shadow Girls runs until May 6, 2018 in Room 207 at the Gladstone Hotel. Tickets avail online at pencilkitproductions.com. 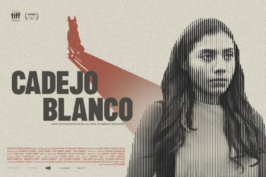