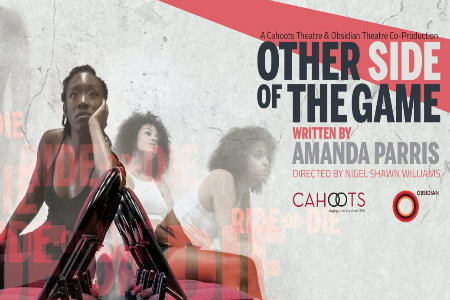 Set before the rise of Black Lives Matter, and inspired by interviews conducted with individuals in Toronto and Halifax, Other Side of the Game is a time-spanning work that tells the story of silenced Black women who organize communities, protect loved ones, battle institutions, and live each day by a ride-or-die philosophy. This first-time partnership between Cahoots Theatre and Obsidian Theatre also marks the professional playwriting debut for Amanda Parris.

As part of my 5 Questions With... series, I asked Ms. Parris to share more about this piece, and the importance of telling these types of stories.

HM: Thank you for sharing your views on this important piece. For those who are not aware, could you share how did the original idea for the Other Side of the Game emerge?

Amanda Parris (AP): This play was inspired by a personal experience. My friend was incarcerated for a pretty serious crime. Before his conviction I went to visit him at the now closed Don Jail. I was sitting in the waiting room for a really long time so I just started looking at the people around me. I quickly realized that the majority of them were women and I became curious about their stories. I began conducting informal interviews with friends and acquaintances who I knew had supported a loved one that was incarcerated. At the time I wasn’t too sure what I would do with those interviews but after connecting and exploring ideas with my initial collaborator, a poet named Keisha-Monique Simpson, the idea to create the play Other Side of the Game was born.

HM: In your interviews with people in Toronto & Halifax that inspired this piece, along with your ‘Ride or Die’ project, can you share what the process of writing the Other Side of the Game was like?

AP: I didn’t want to create a verbatim theatre piece so the interviews were primarily used as inspiration for three things:

The creation of characters,
As a reference for language, and
To help craft the conflicts in the story.

An early draft of the play was presented as a reading at the Piece of Mine Festival. Hearing it aloud and seeing audience reaction was really helpful for my developmental journey. Soon after I joined the Hot House Playwrights Unit at Cahoots Theatre and later became playwright-in-residence there. The space Cahoots provided to share work and hear feedback from creative peers alongside the dramaturgical support given by Marjorie Chan were invaluable supports for my writing process.

HM: I head you grew up near Jane Street in Toronto. In what way did your own Toronto experience shape the context in which you set these stories?

AP: It’s difficult for me to overstate how integral the location of Toronto is to Other Side of the Game. It informs everything about the story. Although the themes are universal the context is very particular on purpose. It was important for me to make the play specific to this city in terms of the language used, the history referenced and the locations named. I wanted this work to be grounded here because I wanted to capture the sound and energy of the Toronto that I grew up with.

HM: Can you talk a bit about how you, director Nigel Shawn Williams, and the cast envisioned how this piece would play out (pun intended)?

AP: I still feel like I have to pinch myself when I think about the amazing team of people who have come together to manifest this story and bring it to the stage. Nigel has been absolutely incredible to work with and his ability to navigate the numerous moving pieces of this story has been fascinating to witness. The stage is constantly in motion, transforming in multiple ways in order to travel across space and time. The entire cast is doubled, with some actors playing up to three roles. Watching them transition between characters is like witnessing a magic show. I’ve tried my best to support everyone with as much context as I can but mostly I’ve just been watching these incredibly brilliant people do things that transcend my initial vision for this play.

HM: I believe pieces like Other Side of the Game are critical in current times. To finish off, any other words about the piece that you’d like to leave us with?

AP: This play was inspired by the stories of women who are rarely invited to share these kinds of experiences with the world. I hope that people come to this play and open themselves up to these stories.

rePLAY: Other Side of the Game is currently onstage at Aki Studio, Daniels Spectrum until November 5, 2017. For more details and to purchase tickets, click here.

Spread the love
Tags:Amanda Parris Cahoots The Featured Other Side Of The Game
Older Post Newer Post