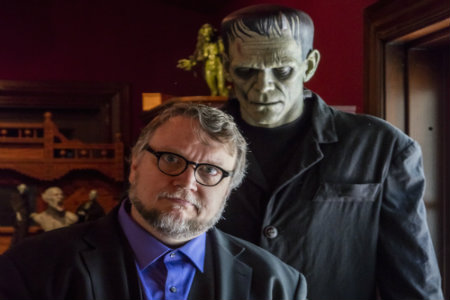 Celebrating the only Canadian stop of the exhibition Guillermo del Toro: At Home with Monsters, the Art Gallery of Ontario (AGO) presents two late-night film series at Jackman Hall. The Films of Guillermo del Toro, running until November 24, 2017. The series honours del Toro’s body of work with screenings of 5 of his key film works.

Nightmare on Dundas Street Movie Night will screen the 10 most terrifying films of all time, as selected by Guillermo del Toro, running every Friday at 10pm — running until December 8, 2017.

The Films of Guillermo del Toro

Oct. 25 and Oct. 27, 2017, 7:00 pm.: Pan’s Labyrinth
An Academy Award–winning dark fable set five years after the end of the Spanish Civil War, Pan’s Labyrinth depicts the monstrosities of war infiltrating a child’s imagination and threatening the innocence of youth.

A personal favourite; I highly recommend seeing it on the big screen.
Rated R | Spanish with English subtitles. Nov. 15 and Nov. 17, 2017, 7:00 p.m.: Pacific Rim
When the monstrous Kaiju rose from the sea, the ensuing war took millions of lives and consumed humanity’s resources for years. On the verge of defeat, two unlikely heroes stand as mankind’s last hope against the mounting apocalypse.
Rated PG-13

Nov. 22 and Nov. 24, 2017, 7:00 p.m.: Crimson Peak
In this gothic romance, a young woman joins a troubled brother and sister in a decrepit mansion on top of a mountain of blood-red clay— a place filled with secrets that will haunt her forever.
Rated R

Oct. 20, 2017, 10:00 pm: Night of the Hunter
While serving time in prison, serial killer Harry Powell meets condemned murderer Ben Harper, who confesses to have hidden $10,000 in stolen loot before his imprisonment. Released from jail, Powell tracks down Harper’s widow and children, stopping at nothing to get his hands on the money.
Rated PG-13

Oct. 27, 2017, 10:00 pm: Halloween
Fifteen years after his first gruesome murder on Halloween night, Michael Myers returns to his hometown of Haddonfield, Illinois to find his next victims.

I have seen this film so many times and I still get the creeps. Absolutely a Hallowe’en season favourite.
Rated R Nov. 10, 2017, 10:00 p.m.: Rosemary’s Baby
After moving into a new apartment with her husband Guy, strange things start to happen around Rosemary Woodhouse. When she becomes pregnant, Rosemary’s concerns over the safety of her unborn child begin to consume her.
Rated R Nov. 17, 2017, 10:00 pm: The Exorcist
When a teenage girl is possessed by a mysterious entity, her mother seeks the help of two priests to save her daughter.
Rated R

Nov. 24, 2017, 10:00 p.m.: The Shining
After taking a job as the caretaker of a hotel with a violent past, Jack Torrance experiences sinister incidents that cause him to become increasingly violent, putting his family in grave danger.
Rated R Dec. 1, 2017, 10:00 p.m.: Repulsion
Carol, a young woman repulsed by sexual intimacy, is left alone in her apartment while her sister is on vacation with her boyfriend. Carol slowly sinks into depression and begins to have horrific hallucinations, ultimately descending into madness.
Rated R

Dec. 8, 2017, 10:00 p.m.: The Haunting
When Eleanor, Theo and Luke decide to take part in a sleep study at a mansion, they get more than they bargained for when they discover the house’s ghostly past.
Rated PG-13 The two series include films I have seen more than twice. The Del Toro’s film series are definitely some of my favourites, but I admit, I am a ‘fangirl’. As for the Nightmare… series, I have seen all of them. They are classic in their own right. Seeing the list, I can understand why Del Toro is such a fan of these.

Tickets for individual screening tickets are $8 for students, $10 for members, and $12 for the public. For details on the Guillermo del Toro: At Home with Monsters exhibition and ticketing information, please visit ago.net.

The Three Ships Collective & Soup Can Theatre: A CHRISTMAS CAROL