The 5th annual One More Night Festival, a one-night only remount of 11 successful productions, over the course of 5 days is fully underway.

The festival includes shows from all genres: comedies, musicals, one-woman-shows, and even a whodunnit. All of them have had rave reviews, standing ovations, awards, and/or sold-out houses. To learn more about the festival and the masterminds behind it, I had a great chat with co-founder Vikki Velenosi.

Vikki and later artistic/business partner Kasey Dunn, founded Brick and Mortar about five years ago. The idea was born out of necessity at Vikki’s loft home.  At the time, she had to use her living room as a rehearsal space for an upcoming show with a small theatre company she was working with.

Over the years they heard about spaces that are available to theatre and other creative people from various people. Vikki & Kasey also met by chance and together they have been managing all spaces that encompass Brick and Mortar now…

Brick and Mortar offers spaces for smaller companies and artists who are starting out. Artists need access to spaces in which to meet, rehearse, create. Through Brick and Mortar, Vikki and Kasey have been able to specialize in the tenants of grassroots theatre: creative use of small spaces; the creative ability to problem-solve with limited resources; the intimate actor–audience dynamic; and the cross trained artist.

Five years ago, Vikki & Kasey also founded The One More Night Festival. It started out as artists’ need to have spaces in which to keep their momentum going after a short run. For example, after doing extremely well at a Fringe Festival and the company thinks they’d like to put on the show again. Like bonus nights, if you will.

This year marks marks the 5th year for the fest. This is also the first year they have a selection process. In the past years, they’ve had applications and also sought out some shows. This year, all shows in the fest came from 100% applications.

The festival will showcase 10 exciting shows this year. These shows have had a great run in Toronto or elsewhere… this means it’s our chance to see what the buzz is all about!

The show spins the tail of one woman who takes a bike trip from Halifax to Vancouver and finds out just how far she’ll go for adventure.

Vikki explained to me how much she loved the story. She also liked the way it was described in the synopsis. This one-woman show also explores gender roles, which is a very important topic as well.

After 12 years, Charlie must once again face the man who murdered his son.

The show was performed in Toronto at FringeTO 2017. As Vikki put it, “the poignancy of the story (direct & sensitive) is timely”, and in my opinion, also necessary.

Just before the playwright, Zita Nayrady’s grandma’s 90th bday, she interviewed her grandma about her life. The play is inspired about a story she’d never heard… a touching, heart-string-pulling love story about her grandmother’s first love in a tiny, war-torn, Hungarian Village.

Vikki hopes to continue fascilitating and making sure these kinds of stories can reach many people. The idea is to create change, no matter how big or small, through storytelling.

The One More Night Festival continues until October 22, 2017 at The Commons space.  For full show istings and to purchase tickets, visit brickandmortartoronto.com. 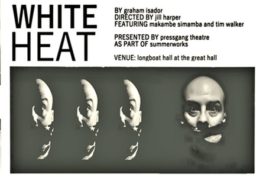 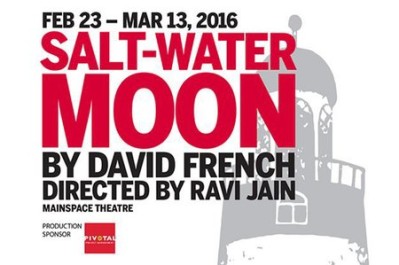 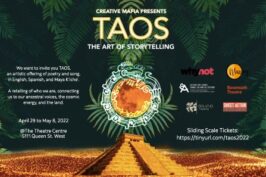