The 7th annual Breakthroughs Film Festival (BFF) has been working tirelessly towards its vision of an industry that recognizes and effectively represents women filmmakers. For the second year in a row, the festival will screen the work of both New Generation (aged 18 – 30) women directors, as well as Emerging Women Directors (any age).

BFF will feature 19 outstanding short films from 9 different countries spanning across 5 continents. Among them are 4 Toronto-based filmmakers, plus award-winning shorts from locations as diverse as Iceland and Japan.

Here a few highlights from this year’s presentation of short films.

Paulette in Paris, Directed by Isabelle Sophie Arouë (FRANCE)
On a summer afternoon, Paulette, a young girl, sees Michel, a 30-year old pickpocket, steal a wallet and decides to follow him. The two embark on a journey across the streets of Paris and form an unlikely friendship.

Wonderland, Directed by Tiffanie Hsu (USA)
Twelve-year old Adeline Tang struggles to navigate America’s adult playground and keep her mother’s gambling under control, all for the promise of that perfect family Christmas holiday once her father arrives. But as the days unfold, Adeline realizes that growing up might not hold all the excitement she’d been hoping for.

Zaya, Directed by Susanne Serres (CAN)
Zaya is a contemporary dancer who has just realized the love for her dance partner Nadege. But first she must realize the love for herself, overcoming her fears and opening up about who she is to her mother.

Jessica Jessica, Directed by Jasper Savage (CAN)
Jessica Jessica is a grown up coming of age story. The funny/sexy/sad/truth of how hard it is to be a woman who wants to settle down, but won’t settle.

The Last Dream, Directed by Noemie Nakai and Carmen Kobayashi (Japan)
In a future where people have lost the ability to dream, a company has made a business out of generating perfect dreams that would satisfy as many clients as possible. Khalil, a model employee, had always been one of the top performers until one day, his dreams are no longer to the liking of the company…

Living Here, Directed by Sarah Baril Gaudet (CAN)
This is a story made of solitude and wind told with the poetry of Nunavik’s stark tundra and the beauty of young Martha’s words.

Work, Directed by Claire Allore (CAN)
Two sex workers in Toronto share experiences relating to race, gender, and emotional labour in their work.

Vrede, Directed by Lodi Matsetela (SOUTH AFRICA)
Set in apartheid South Africa in the ‘60s the film follows the life of Ntombizodwa, banished to live in the far flung town of Vrede, sent there to serve her house arrest sentence. Everyday becomes an exercise in anticipating the next modus of harassment the apartheid security police will use on her.

Rosario, Directed by Marlen Rios-Farjat (MEXICO)
Rosario, a housewife who is the caregiver for her ill husband, silently struggles between her responsibilities and her desire for a more fulfilling life.

The Things You Think I’m Thinking, Directed by Sherren Lee (CAN)
A black male burn-survivor and amputee goes on a date with a regularly-abled man. After the bar, they go back to his apartment where he faces his demons as he attempts to experience intimacy for the first time since his accident 10 years ago.

Breakthroughs Film Festival runs June 15-16 at the Royal Cinema. Tickets are $12 for one night or $20 for the two-night festival pass. To purchase tickets and full festival listings, visit breakthroughsfilmfestival.com. A limited number of tickets will be available at the door.

This year’s poster image was designed and created by the talented Vesna Asanovic. 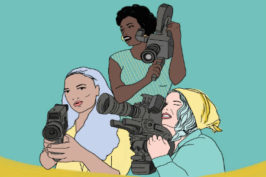