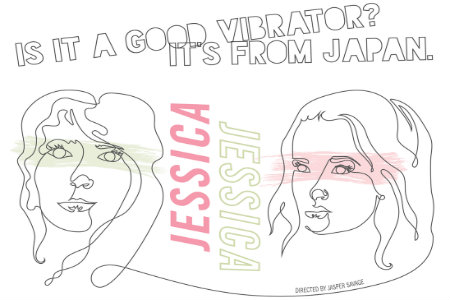 Jessica H (Jessica Hinkson) is a smart, strong, savvy woman who is looking for love and wants to start a family with the right guy, but she’s sleeping with all the wrong ones while she looks for him. Jessica G (Jessica Greco) is a vulnerable, intelligent, witty woman who is in those first fragile weeks post breakup. Her intentions are noble but her execution shameful when she’s caught stalking her ex outside his house.

This funny, sexy, awkward short film does not shy away from depicting the realities of many women who want to settle down, but won’t settle. I am so pleased I had the opportunity to ask the film’s writer, Jessica Greco, a few questions.

HM: From what I understand, Jessica Jessica was born out “endless brunches and phone conversations about the trials of being in our 30s and dating.” Out of the many stories you have shared with Jessica Hinkson, how did you decide which would make it into the short film?

Jessica Greco (JG): It was actually Jessica Hinkson who started pitching story ideas out of our secrets. She had ear marked a couple I had told her in the strictest of confidence. And once I made peace with the fact that some of my most embarrassing moments would be on screen, then everything was fair game. Obviously we took artistic license, this is not a biography, but we definitely pushed each other to get comfortable and share. If it made the person it didn’t happen to laugh, then it was going in the movie!

HM: I appreciate how you explore the reality of what it is like to be a single woman in her 30s. As screenwriter how did you work with your co-star Jessica Hinkson, and director Jasper Savage, in making certain the film was relevant, funny, and realistic?

JG: Jessica was my collaborator from the projects inception, I sent all drafts to her first. I always want notes, I may not agree with all of them or use all of them, but I always want them. If there is an opportunity to improve a piece by listening to someone else’s insight then I’m all ears. So Jessica acted as my story editor and sounding board, giving me lots of space when I needed it, and insight when I needed it. And she kept me on a deadline, thank god. Jasper came to the project once it was written and almost intuitively got what we were trying to do with both the story and stylistically. She was able to add layers to the story visually, and she understood the relationships so well that she could cut pieces of dialogue that intern let the acting shine through without sacrificing narrative. They brought their own life experiences to the piece and helped ground it, make it bigger, funnier and more beautiful. I was so lucky to have them both by my side.

HM: The film’s overall production team is comprised of women. Could you please talk more about the team and how it came together?

JG: We had many people we wanted to collaborate with. Jasper [Savage] came to us by way of an introduction made by the lovely ladies at Babe Nation. I became a fan of her photography after meeting at the Birks Women in Film event at TIFF a few years earlier, and was giddy at the idea that she was open to directing. Jessica knew Emily Andrews from her work on other projects and had a gut feeling that she’d be a great fit for us. From there Emily brought with her her kick ass team from Filmcoop, who produced the film, and who all happen to be ladies. And we were all fans of our dope as they come editor Kat Webber, and super keen to have her cut the film. The rest of our crew came to us organically by way of recommendations. Truthfully we didn’t set out to have a team that was predominately women, but we knew this story had to be told through the female gaze. And it just so happened that there were all these talented, qualified, cool, artistic women available. So we snapped them up. It was the first time in over 20 years of being a professional actor that I had ever worked with so many women in charge. And it was a delight.

HM: Jessica Jessica has screened at other festivals. What has been the audiences reactions thus far?

JG: It’s been so positive. People talk back to the film in the screenings, and not in a whisper, they spontaneously say things out loud like ” too real ” or ” truth! ” which is an amazing compliment. Women especially really love it and relate, which is all I could ever hope for. They seem to feel like they’ve been invited to join our table at those secret spilling brunches. After every screening I’m approached by someone who wants to confide their most embarrassing thing to me, whatever that is for them. Like you would with a best friend.

HM: I know I’m not the only who thinks this film can evolve into a feature. Anything you can share about this possibility?

JG: When I was writing the short I kept saying to Jessica Hinkson that the story felt bigger than 12 minutes, so we decided early on that we would make the short a jumping off point. And…. we’re currently developing Jessica Jessica into a web series! Based on the same characters as the short the web series will allow us to explore these women’s world further. We’ll explore their family lives, their careers, as well as issues like women’s health, mental health, fertility, all kinds of sex, sexuality, relationship, love stuff. And of course, friendship. This project started off as us wanting to make something we could recognize ourselves in. And now it’s so amazing to know that we’re making something that other people, other women can recognize themselves in.

In Review: Off the Rails