Faran Moradi is an Iranian-Canadian filmmaker, born and raised in Ontario. He is best known as a Telefilm Talent to Watch recipient for his feature film, Tehranto.

Tehranto is an unlikely story of love and family where Badi and Sharon, two young students with very different upbringings from a divided Iranian community, accidentally fall in love.

Tehranto is Faran’s first feature film and is about to have its World Premiere at the Canadian Film Festival. In the midst of a busy schedule, Faran took time to participate in my 5 Questions With… series.

HM: Faran, Congratulations on your first feature film! Let’s maybe start with a bit of history. Could you share a bit about your own upbringing being an Iranian-Canadian, and how this history informs your work?

Faran Moradi (FM): Thanks so much for this question! Me and my family are Baha’is – my family had to escape Iran through mountains before finally arriving in Canada as refugees in 1989. I was born a few years later in Cobourg, Ontario. Growing up, I attended French schools, large family gatherings surrounded by Persian festivities, I mostly practiced my English with the neighborhood kids, and our family attended Kanienkeha powwows in Alderville and Tyendinaga.

Beyond the various cultural exposures, due to the nature of how my parents came to Canada, I’ve always had an obsessive interest in social justice – this led me to learning a lot about Iran’s human rights violations, as well as Canada’s colonial exploits. All of this, kind of left me a little lost and confused in my youth experiencing what W.E.B Dubois describes as “double consciousness”. I felt both Canadian and Iranian, and at the same time neither Iranian nor Canadian. As a result, a lot of my work centers around characters trying to figure out who they are – which was also the case with my last short film Blackpowder and Guilt.

HM: I understand you not only directed but also wrote the screenplay for Tehranto. I really appreciate the various family dynamics and characters in the fim. I felt like I understood them even if I’m not of the same culture. I’m curious as to who are/were the inspirations for the main characters in the film?

FM: Firstly, thank you so much for saying that! Badi and Sharon are two sides of myself. Half of each character is based on myself, and the remaining halfs are essentially opposites of the other. So for example, I’m a Canadian born artist like Sharon – as a result, Badi is an immigrant with scientific education. I’m obsessed with Iranian history, and so is Badi – Sharon, on the other hand, is comparatively white-washed.

Their supporting cast (like the friends and parents) are based on various people that I’ve met – in fact, Badi’s dad is not only inspired by my own father, but he’s even played by my father, including the Super 8 footage from the beginning of the film which is family archival footage from 1980s Iran. Jess is a bit of a cultural response to how immigrant characters are often depicted as jesters or fools. Examples include Raj from the Big Bang Theory, Fez from That 70s Show, and more recently Rashid from Dear White People. Having the white character among the principal cast occupy this trope was absolutely an intentional decision.

HM: Why choose the Rom-Com type of film for Tehranto?

FM: The funny thing is that Tehranto being a Rom-Com wasn’t a deliberate decision. Generally, my preference is to do darker or more naturalistic dramas like my last short Blackpowder and Guilt, but there’s already a lot of dark and despairing movies about Iranians. As I met more Iranians in my adulthood, I was surprised to hear that many of them don’t watch modern cinephile Iranian movies very often.

A common comment that I was hearing was that the lives of a lot of Iranians are already pretty tough, so they’d rather not watch two hours more of that when there’s so much more to our cultural identities than despair. Iranian cultures are filled with vibrant tapestries, lively music, romantic poetry, and roaring laughter, but this side of us is never really explored in pop culture. The film started off as an authentic love letter to Iranians in the diaspora and in my pursuit to reflect the untold sides of who we are, the movie kind of turned into a rom-com.

HM: Let’s talk about the production side of filmmaking in Canada. If possible, could you share some insights on any challenges in obtaining funding for this type of film?

FM: I always say success in film is a combination of three things: character, work and luck. I can’t stress that third one enough because the stars really aligned for this movie to even be possible. I’ll forever be grateful to Ian Thompson, Maureen McKeon and Jean Desormeaux for selecting our script as Sheridan’s submission to Telefilm for funding. Another thing that had to happen was for Matt Johnson and Matt Miller to publicly challenge Telefilm’s previous funding model, prompting them to make the changes necessary for “Talent to Watch” to happen. Then a panel of filmmakers judged the scripts and pitches to finally select which movies received funding. Some of these judges even gave us additional advice once we were in early development including Albert Shin, Cory Bowles and Molly McGlynn.

From here, the “character” part came into play because now we were making calls to assemble a crew of people we wanted to work with because of their character and work. We were even given crazy discounts due to relationships we’d built with Ontario Camera on previous projects including Blackpowder and Guilt, and free gear from Sinking Ship where I had been working as an Assistant Editor. While making the film itself the cast and crew worked hard and carried out their expertises with such artistic brilliance and care.

That balance of character, work and luck was apparent every step of the way from receiving funding, to the cast and crew that actually made the film. Also a huge shout-out to Navid Negahban who graciously offered to do the part of the Narrator on his super busy schedule, basically doing it as a favour to us who he’d never actually even met before!

HM: Now that Tehranto will have its world premiere. What do you hope audiences take away from the film?

FM: I’m hoping that when the credits roll, the movie will spark some sort of discussion among audiences – this is my number one goal with any film I make. Whether it be conversations about things that they learned, or things they already knew and either agreed or disagreed with – if people talk about it, I’ll be thrilled. Even from a meta point of view, if people want to discuss and hypothesise over the logistics of the film that’s cool too, because how we managed to make this movie on a budget below $200,000 is a mystery even to me, and an absolute testament to the brilliance of our producer, Jackie De Niverville. 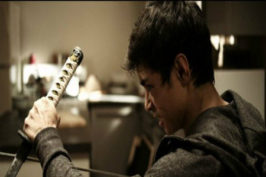