To learn more about Goldstein’s passion for Magma, its music, and the making of the film, I had the opportunity to ask him a few questions…

HM: From my research, I’ve learned that you have been a fan of Magma for over 40 years. As I am not very familiar with the band, can you share how you first discovered Magma & their music?

Laurent Goldstein (LG): At the time, I was already going to a lot of concerts and listening to all the bands famous back then. I had a large record collection. I listened to the album “Mekanik Destruktiw Kommandoh​” in my record store. As soon as I heard the first notes, I was amazed at how beautiful and unique the music was. I then saws the band a few days later and my connection with Magma started, the passion for the music never stopped.

HM: I read that Vander constructed a language Kobaïan, which is “the language of Kobaïa, a fictional planet invented by Vander and the setting for a musical “space opera” sung in Kobaïan by Magma on ten concept albums.” In your opinion, how does this language enhance / complement Magma’s music?
​
LG: It is an “Organic’ rather than an intellectual ​language. The words came to Vander as he was and still is, composing his music. In his opinion, this language is a better representation of the feelings and emotions expressed by the music, rather than french or english.

HM: Let me move on to the documentary, To Life, Death and Beyond: the Music of Magma. The film is described as a “coming together of individuals who share a passion for this unique music and of musicians who went beyond the limits.” In current times, what do you think Magma & its music offers to old and new fans?

​LG: The music is truly timeless. it is so unique that it is never dated, as if it came from another place. The number one element is maybe the energy that comes through the music, which is very special. Vander calls this energy “Zeuhl” and there​ are groups and musicians all over the world who play “Zeuhl Music”. Magma is attracting a large audience of people in their twenties now … maybe about 30% of the public at the concerts are in their twenties.

I think the overall message is an inspiring one. If you are passionate about you do and decide to pour all your energy into it, there are no limits to what can be achieved and you can, as a musician for example, be sitting on top of the world.

HM: I understand the band will be performing after the film premieres in Toronto this weekend. What has been the band’s response to the film and being able to travel with it?

​LG: The band is very supportive. Toronto will be a North American Premiere. It is such an exciting concept to be able to show the film that tells the story behind this magical music, and then being able to watch the band live!​

HM: For people who would like to see the film but are unable to attend the screening, how can they access it in the future?

LG: ​They can buy the DVD on our website at themusicofmagma.com, but I hope they will be able to come.

Indeed, I also hope you will be at the Royal Cinema on August 20th at 2pm to see the film with Magma in attendance! Tickets to the screening are $10 in advance or at the door.

Also, the band will be performing at the Mod Club Theatre that evening. Tickets for the concert are sold separately.

Spread the love
Tags:Documentaries Featured Magma To Life Death and Beyond the Music of Magma
Older Post Newer Post 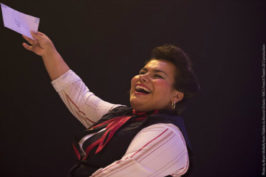