Although labelled as a sequel of sorts, She Never Died does not require that you see the first film. The film olds its own quite well.

The film introduces Lacey (Adeliyi) early on and sets her up as an immortal with an attitude. She sleeps on the street, hunts and beats up the ‘bad guys’, and later eats their fingers for the marrow found in their bones. She soon get the attention of an aging detective by the name of Godfrey (Peter MacNeill), who has been hunting down one of these bad guys, Terrance (Noah Dalton Danby), for quite some time suspecting him of being the leader of a human trafficking ring.

Godfrey sees Lacey can heal almost instantly after fighting with these bad guys, which gives him the idea they should team up to find out who is the leader of this human trafficking ring. Lacey is somewhat easily persuaded and agrees to help the detective in exchange for a place to sleep at night and a refrigerator for her to store ‘food’.

The film then shifts into action mode. We see Lacey kick some real butt, while also saving a young woman named Suzzie (Kiana Madeira). Not all goes smoothly, however. Godfrey is soon captured and tortured by Terrance and his sister Meredith (Michelle Nolden), who is the one in charge of the human trafficking ring Godfrey has been investigating for years. Lacey and Suzzie have to devise a way to save Godfrey and help him apprehend Terrance and Meredith to end the human trafficking ring for good.

She Never Died contains good elements from zombie/vampire and action films. Adeliyi portrays Lacey as somewhat detached from her present world, as she is tired from the immortal life she’s been given. More insight into her past would be helpful, but it does not take away from the story. Adeliyi also gives Lacey a bad a** attitude. Lacey is not looking for anyone’s approval nor does she care for it. A memorable quote from Lacey, “why do I have to be a thing?”, summarizes her sentiments well.

Alongside MacNeill and Madeira, this unlikely trio of friends round up a good mix of characters. They are not heroes per se, and it works well in this film.

It is good to see Jason Krawczyk‘s script, who also penned He Never Died, stand out on its own. As such, She Never Died is not truly a sequel but more like an extension of the themes presented in the first film. This is an indie film with a smaller budget than many mainstream films, yet the action sequences and effects are polished. The overall production looks good on the screen thanks to designer Jim Peacock. The cinematography by Ian Macmillan also gives the film some interesting angles.

She Never Died is an entertaining film with a decent combination of genre themes that will garner positive responses from festival and general audiences alike. The film will have its Toronto premiere at BITS this weekend. 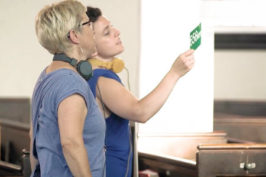