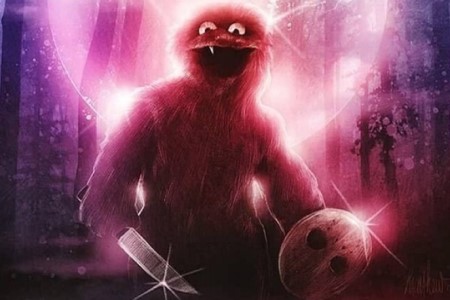 Premise: A group of teenagers must discover if the psychotic killer stalking them is their emotionally damaged friend, or his murderous childhood toy.

The film starts with a mother (Lisa Ovies) gifting her newborn son Jamie her childhood puppet named Simon, and starting the tradition of watching horror movies over the Christmas holidays. It seemed like Jamie’s childhood was off to a good start but… Unfortunately, his mother dies from a terminal illness a few years later. Not long after, a step-mother comes into the picture only to try to get rid of Simon and teach Jamie ‘to grow up.’ Nothing could go wrong with the step-mother here, right?

It also appears Jamie has also been under the care of a doctor who has suggested he take medication because his ideas that Simon is alive are not ‘normal’. This bit of information might or might play out later on in the film, but you will have to see it to find out.

Back to the gang. Once they arrive at the cabin, the fun really begins. There is plenty of booze and drugs, and of course, sex too. Quickly enough Jamie’s girlfriend Jessie (Lisa Durupt) conveniently finds Simon in the basement. As this is a horror film, things cannot continue to go smoothly. After the first day, Simon begins to hunt the group one by one.

There is a lot to like in Puppet Killer. There are many Easter eggs for fans of late 70s and 80s slasher films, including a classic nod to The Shining.

The pacing of the film also works really well mixing comedy and creepy moments throughout. Ovies directs a cast that has great chemistry on-screen, including BITS alum Gigi Saul Guerrero alongside Richard Harmon, Lisa Durupt, Lee Majdoub and scream queen Jessica Cameron in a small part towards the end of the film. The ensemble cast do not take themselves too seriously as they are basically much older than high-school age in real life.

Although Puppet Killer draws from many established genre tropes, it does so in a funny, creative way. The film delivers some excellent kills and scares. A big shout out to the puppeteer Asia Mattu who makes Simon come alive in a believably cute and evil manner all at once. Majdoub who does Simon’s voice á la Elmo does a great job in giving the puppet personality as well. Simon is a very memorable character. Another shout out to the production crew; especially to the design team who created Simon’s secret lair. It is quite the hiding place!

Puppet Killer will not disappoint fans of horror comedies with a B-movie, cult feel. The film will open BITS this week in Toronto.