Considered by many to be one of the great classical works of the 20th century theatre, Chekhov described The Cherry Orchard as a comedy, even calling some parts farcical. It has been described as “a theatre poem of the suffering of change,” or a poem about life and death, transition and change.

The story revolves around the return of Lyubov (Arsinée Khanjian) to her family’s estate after many years abroad, in France. Now debt-stricken, Lyubov and her family must face reality, as their legacy may not continue for much longer — their estate is up for sale in a matter of weeks.

My companion has this to say, “Chekhov’s classic tragicomedy is beautiful (sic) brought to life by a talented cast. You are transported to a past era that eerily reminds us of fallen states and ruptured societies in modern times”.

The Cherry Orchard continues on stage at Streetcar Crowsnest until April 13, 2019. For advanced tickets and more information, please visit crowstheatre.com. 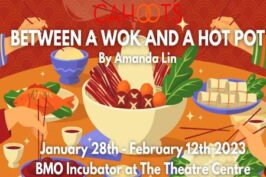 Spotlight: Playwright Amanda Lin’s ‘Between a Wok and a Hot Pot’