Last week I had the opportunity to attend a performance of The Drawer Boy. I was keen to see this production directed by Nina Lee Aquino, starring one of my favourite actors Andrew Moodie alongside Craig Lauzon, and Graham Conway.

Miles (Conway), an aspiring actor from Toronto, has relocated to rural Ontario. The actor’s theatre company is there to research country life with the hopes of developing a play. Miles gets to know two farmers, Morgan (Moodie) and Angus (Lauzon) during his extended stay at their farm. While there, he discovers the challenges of manual labor along with a secret that has been hidden for decades.

The play’s dialogue and production stays close to Healey’s work. What I particularly liked in this production, were the thoughtful performances of each character. Each character is written with complexity, and it is evident each actor invested a great deal of themselves in embodying their respective character. When characters are written in a well-rounded manner, like they are in this play, it is a treat to see great actors bring them to life. That is the case here; I was invested in hearing each of them speak whenever they were on stage. I had complex feelings towards each of them. My heart sank at finding out Angus lost the ability to make new memories during WWII. I felt compassion and anger towards Morgan at times. And I also had mixed feelings towards Miles, yet I understood his intentions as coming from a good place.

In the post show talk, Moodie discussed how he never thought he’d have a chance to play any of the roles in this play. He did see the original production in 1999, and thought to himself “this is how you play these characters!” He was referring to the cast then, but I argue that the same can be said for the current cast. Moodie explained how preparing for his role was a “big mountain to climb…” He began with researching about African-Canadian farmers of that time; the 1970s. Director Nina Lee Aquino told all three cast members to “embrace your culture.” As such, Moodie created a mix of an accent including Caribbean and Canadian diction for Morgan. On stage, one can see the deliberate manner in which Moodie wanted to portray Morgan — a man of a few words… serious, yet funny in a sarcastic way, but also a caring person.

In a similar manner, Lauzon shared how “playing Angus it’s like a dream come true.” The complexity of Angus’ memory loss helped Lauzon in developing his character as a First Nations farmer. In a way, he explained, Angus is a metaphor for “Indigenous people of that generation that had all taken away. Even when [Angus] is told the history of events that led to his memory problem, it’s not his real history per se.” In his case, he embodies many an Indigenous person that has trouble remember his/her own story… Lauzon evokes Angus’ sadness, anger, and strength almost effortlessly.

For Conway, he described how he also “didn’t imagine he’d be in the play, ever!” But in a way, he also admitted he had the easiest job because his character was not really that different from himself. He is an actor coming from a big city into a remote area or setting. Conway’s Miles is funny, at times endearing, and at times frustrating — all of this makes sense in the context of who is portraying. His intentions to learn from Angus and Morgan are good… the fact he decides to take one of their very personal stories for his work is what makes this play complex and also very thought provoking.

The Drawer Boy is a show about the stories we tell ourselves and how they shape the world around us. It is also a story about appropriation of these people’s lives, which in fact really did happen in The Farm Show. Healey’s work is still relevant today in that we’re now realizing how important it is to engage with those whose stories we wish to share. This production of The Drawer Boy is a must-see. I also want to commend the sound, set, and lighting designers; their work enhances the acting in this production. I highly encourage you to stay for the post-show talk, if it is an option. 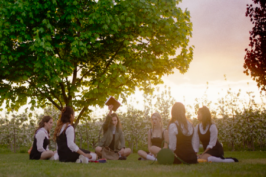